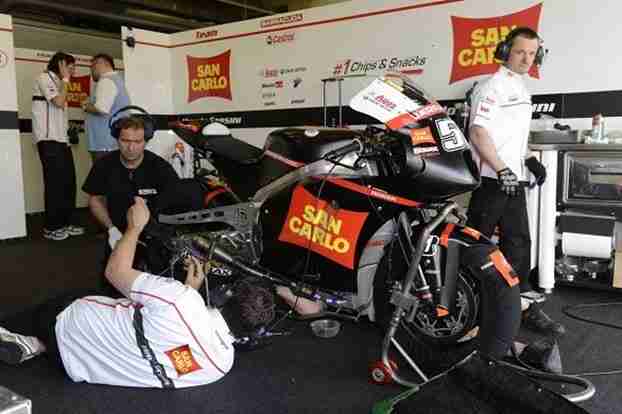 Team San Carlo Honda Gresini rider Alvaro Bautista produced a result that was above expectations in tonight’s Grand Prix of Qatar after a difficult weekend, which had got worse in warm-up with another crash. However, the plucky Spaniard battled hard to finish seventh, just 0.033 seconds shy of sixth after a thrilling battle with Nicky Hayden. The team’s Honda CBR 1000R powered FTR machine enjoyed a less successful debut, however, Michele Pirro forced to retire with a technical problem having at least proved that he has the pace to run with the best in the CRT class.

“We have finished a problematic weekend in a good way. I have struggled for front feel in practice and then we had another crash on a cold tyre in warm-up. That was a problem for us because we had gone back to the setting from winter testing but only got chance to try it on the sighting lap and warm-up lap. I made a good start and stayed with the group I was in, fighting for sixth to the end and only just missing out. We were still lacking some front feel and a bit of speed in corner exit, which would have helped out in the fight with Hayden. Anyway, I am happy because it is the first race I have finished since Aragon last year so that’s important. I have to thank the whole team for working so hard to give me the bike I’m asking for. I have great confidence in them and I am sure we will improve for the next race.”

“We’re still having some teething problems with the bike and it’s frustrating for me because I actually got a good start tonight. Lap by lap I started to have problems with the rear wheel and had to come back in. It has been more like a test for us than a race and I’m disappointed because we showed good pace in practice and I think we could have had a good race. But it’s a new bike so we have to be patient and trust that better times are ahead.”

“Alvaro had a good race considering the fact he was lacking confidence with the front throughout practice and crashed in warm-up. He rode well after a difficult weekend and showed that he has the potential to take this bike forward over the coming season. It was important to finish the race and he did that without ever backing down from the fight for sixth so I am happy and confident about the future. We had some problems with the CRT but we know how much work we have to do. Well done to Michele for the effort he put in and thanks to the team for their continued hard work and belief in this project, which gives us all motivation for the season ahead.”