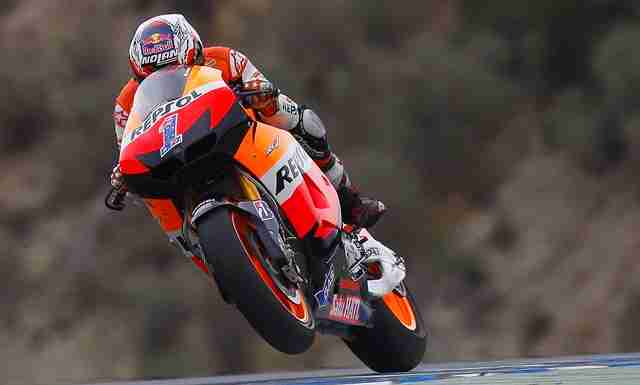 The 2012 MotoGP season has kicked off with the first free and only practice session that MotoGP will be holding this evening at Losail, Qatar. Repsol Honda’s Casey Stoner posted the fastest lap with 1:56.474, but the Australian wasn’t as fast as everyone expected, because not only was title rival Jorge Lorenzo hot on his tail in second place and just 0.174 adrift, but Nicky Hayden who was one of the biggest surprises of the session grabbed the third spot with his penultimate lap flyer, giving a big and shining ray of hope for Ducati.

Ben Spies finished the session in fourth after having lead the top of the timesheets several times, while Dani Pedrosa who lingered down in the double digit positions for most of the 45 minute practice had to let it rip in his last lap to post the fifth best time, but wasn’t able to break into the 1.56s. The second surprise of the evening was Yamaha Tech3s Cal Crutchlow, who actually lead the timesheets for a brief moment during the second part of the session before being pushed back to sixth, but he was the best satellite rider of the evening ahead of Gresini’s Alvaro Bautista who pushed the envelope with his RC213V to reach a top speed of 336.8 km/h and Tech3 team mate Andrea Dovizioso.

Hector Barbera on the Pramac Ducati took 9th and out performed Ducati factory rider Valentino Rossi by a mere 0.002s, with the Italian ending up in tenth and a massive 1.414 seconds off pace and not seeing the light at the end of Ducati tunnel. Karel Abraham on the Cardion AB branded GP12 was also hot on Rossi’s tail, just 0.025s kept him the factory rider. MotoGP rookie Stefan Bradl ended up 13th and the last of the regular MotoGP prototypes and 2.460 seconds from fellow Honda rider Casey Stoner.

The best CRT rider was Randy de Puniet on the Avintia ART machine followed by Colin Edwards and Michele Pirro on the least developed CRT bike of the group. If Barbera was able to hit a top speed of 337.2 km/h, the slowest bike in the field was Danilo Petrucci on Ioda’s Racing Project who managed 288.5 km/h and that is a massive 49.7 km slower.