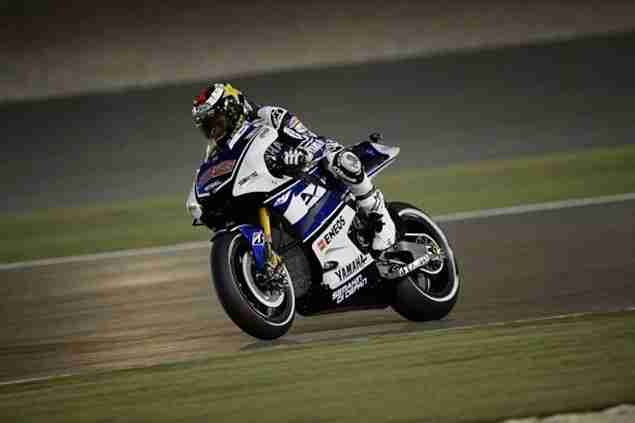 Jorge Lorenzo saved his best run for the final minutes of FP3 at the Losail circuit in Qatar. The Yamaha factory rider dipped under the 1.56 mark three consecutive times and with his third lap, using a soft rear tire, posted the best time of 1.55.032 that took him to the top of the timesheets and for the first time this long weekend finished ahead of his rival Casey Stoner. This practice session showed off more the Yamaha’s than the Honda’s, as Cal Crutchlow grabbed the second spot on the grid and he was just 0.154s from his factory counterpart, which bodes very well for tomorrow’s qualifying session.

Casey Stoner lead most of the session and posted a 1.55.674 on his fourth lap out, but when he went for the last flying lap found a slower Alavaro Bautista in his way and had to settle for third giving the Spaniard the famous Australian head shake of displeasure. Andrea Dovizioso put his Yamaha Tech3 into 4th and was the last rider to break the 1.56 barrier.

Hector Barbera was again the fastest Ducati rider and just 0.049s from Pedrosa. The Pramac rider took the sixth spot – he was as high up as third when on his third lap, and did a 1.56.163 – grabbing a tow from Lorenzo – however he couldn’t better himself after his team did some fine tuning, but he was the last rider to be within a second from Lorenzo. Nicky Hayden managed to take 7th after lingering down the charts for most of the practice. Valentino Rossi will be doing some head scratching again as he ended up behind both Ducati riders in 8th and 1.233 seconds off the top of the time sheets.

Following Rossi was Stefan Bradl who again bettered his lap times but it wasn’t enough to get him past the 9th spot, while the guilty Alvaro Bautista who ruined Stoner’s flying lap was 10th. Ben Spies had a big tumble at turn 12 at the beginning of the session that compromised all the hard work he’s been doing, he tried to return for a pair of laps but then sat out the rest of the session – he ended up in 11th. Asapr Art rider Randy de Puniet also had a big crash at turn 7 on his last flying lap that left him visibly limping, but he managed to pip Colin Edwards this time and be the fastest CRT rider of session.