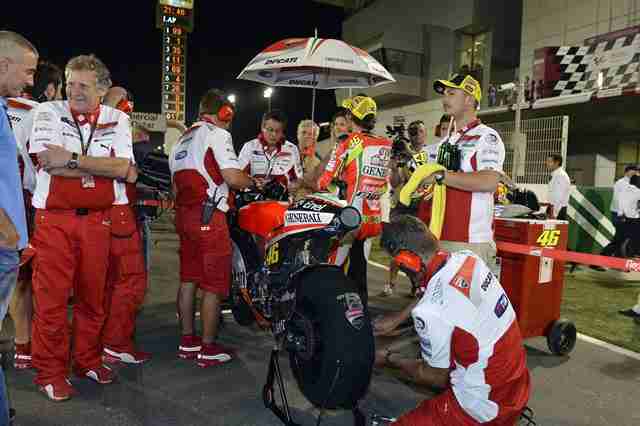 At the opening round of the MotoGP season, the Ducati Team earned a sixth-place finish with Nicky Hayden and tenth place with Valentino Rossi. The American didn’t get a great start, but his performance improved steadily as the laps ticked down, and he came out on top of a hard-fought battle with Alvaro Bautista, Stefan Bradl and Hector Barbera to finish in sixth place. Having started from the twelfth spot on the grid after a difficult qualifying session, Valentino Rossi dealt with a number of problems but worked hard the entire race, eventually turning decent lap times.

The racing department in Bologna and the Ducati Team engineers will continue to develop the GP12 in an effort to make progress for the next Grand Prix, which will take place in Jerez, Spain, on April 27-29.

“I felt we had the potential to run with Dovizioso and Crutchlow, but considering my injuries and limited testing over the winter, I guess sixth is pretty good. I lost some positions at the beginning because I got hung up behind Spies and wasn’t very good on the brakes, but as the race went on, I managed my tyre well and got stronger. That group I was in was fighting hard, and I was happy to bring Bradl back and come out on top of that battle. We put some good points on the board, got some data and learned a lot from riding with other people. I’m excited for the season. I think if we improve some things, we have the potential to put up some good results. I’d like to thank the team, the sponsors and everybody back at Ducati for all their work, because we’ve clearly taken a step forward since last year.”

“Unfortunately, I lost a lot of time in the beginning because when I had new tyres with good grip, the rear pushed a lot, making it very difficult under braking. Then Barbera pushed me off the track and I lost five or six seconds. Otherwise, I could have stayed with that group. As the tyre became used and began to slide, I started to ride a bit better and to do better times, to the point that I matched my best time on the last lap. By that point though, it didn’t count for much.”

“It was a challenging weekend for our team, but we can also look at some positive aspects as we continue to focus on working with the still-young GP12. Valentino had a difficult qualifying session, and he had problems in the race, particularly in the early laps with fresh tyres. We must learn how to solve this, because in the end he posted some good times. Nicky felt more comfortable during practice, and today he rode with great determination, scrapping with Bautista, Bradl and Barbera to win the hard fight for sixth place. We’ll compare the data and the information we gathered from both riders in order to improve our bike for Jerez.”