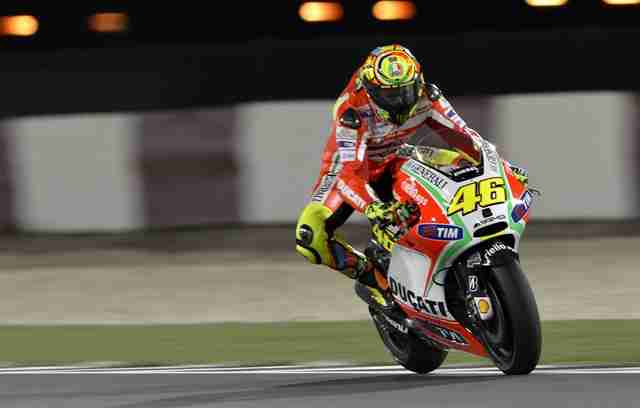 The opening round of the 2012 MotoGP season continued this evening, with the second and third free practice sessions taking place at Qatar’s Losail International Circuit. Although the area was buffeted by fairly strong winds for much of the day, the surface grip improved compared to last night’s dusty conditions, forcing the riders and their teams to adapt their setups accordingly. Both Nicky Hayden, seventh at the end, and Valentino Rossi improved their performances, with the Italian in particular working with the hard tyre, consistently lowering his times with the race setup. Only in the final exit did he mount a softer tyre, with which he posted the eighth-best time of the day.

Qualifying is scheduled for tomorrow evening, with the first race of the season to take place on Sunday night.

“As the track is cleaning up, we’re getting more grip, but in a way that’s hurting us since I’m also getting more chatter. When that happens, I can’t keep my lean angle, and I run wide, especially in the flat corners. We tried some different springs but haven’t found the right solution yet. Chatter is so strange and inconsistent sometimes, but we’ll have a look at the data and do our best to sort it out. My pace isn’t great, but although I’m not thrilled with how the day went, the bike is certainly doing well on top speed, which is going to be important in the race.”

“Today went pretty well, and I’d say that the last session was the best. The position is nothing fantastic, but on the positive side, I’m very consistent with the hard tyre. The front of the bike is giving more feedback, so I can push more, which is very important, and the bike is very fast at the end of the straight. The understeer is still there, but now I think we have a place from which to work. We hope to improve two or three small things with the setting for tomorrow, and we’ll try to qualify on the second row.”