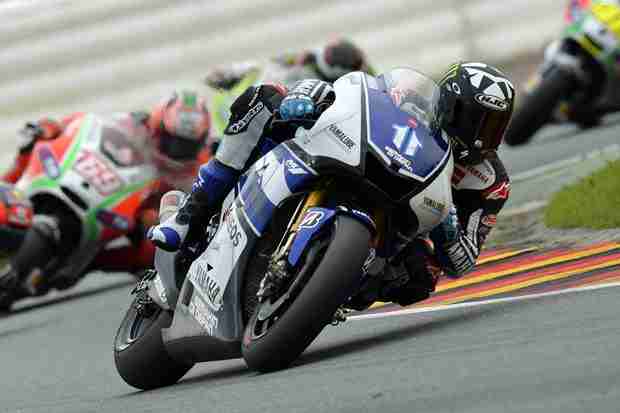 The MotoGP paddock arrives in Tuscany this week for the third consecutive race weekend in a row, the Grand Prix of Italy at the Mugello circuit. Yamaha Factory Racing rider Jorge Lorenzo prepares for the weekend after an incident packed previous two races which saw him first lose his 25 point Championship advantage over Casey Stoner, then regain a 14 point lead over new second placed rider Dani Pedrosa. The Mugello circuit is a favourite for Lorenzo, having taken victory in the 250cc class, two second place premier class finishes in 2009 and 2010 and his first Grand Prix premier class win last year.

Team mate Ben Spies heads to Mugello having valiantly battled against tyre issues in the last two races, intent on finding a set up solution to eliminate the issue in Italy. His first visit to the Tuscany circuit provided an entertaining battle, running as high as fourth at times before finishing in seventh in 2010. Last year saw another strong fight with the Texan eventually finishing just off the podium in fourth place.

The Mugello circuit is one of the fastest tracks on the MotoGP Calendar. With a straight of over a kilometer in length fans can expect to see some incredible speeds as the 1000cc prototypes race there for the first time. The rest of the track is guaranteed to provide exciting racing with varied camber and gradient changes and high speed chicanes set on an extra wide track with many overtaking possibilities.

“After two very difficult race weekends we arrive at Mugello, where we delivered a great victory last year. I love the track; it’s very fast and should be a good one for our bike. I’m very happy to be leading the Championship but we still have many races to go so our target is to again aim for the podium and victory if it is possible.”

“Sachsenring was a very difficult race for us, with the different weather conditions it proved to be hard to find the right set up. Having found something that worked on Sunday we were then unfortunately compromised by a lack of side grip so were unable to ride to our full potential. Mugello is a much faster track which should suit our bike well so I can’t wait to get started on Friday.”

“We’re looking forward to some stable weather, the last couple of races were quite dramatic on that front. Jorge had a fantastic victory at Mugello last year, we know he’s fast there and he loves the track. It’s the ninth race so we are half way in the season and so far we are looking under control and fighting for the Championship.”

“The last two weekend’s have been not what we predicted, but finally we head to Mugello with a lead in the Championship, a place where we know Jorge is very fast from last year’s race. Ben has had two difficult weekends but has ridden very well under compromised situations. We know the bike can work well so we hope to find a set up and a tyre choice that work well as early as possible this weekend and hopefully enjoy stable weather to focus on race day!”