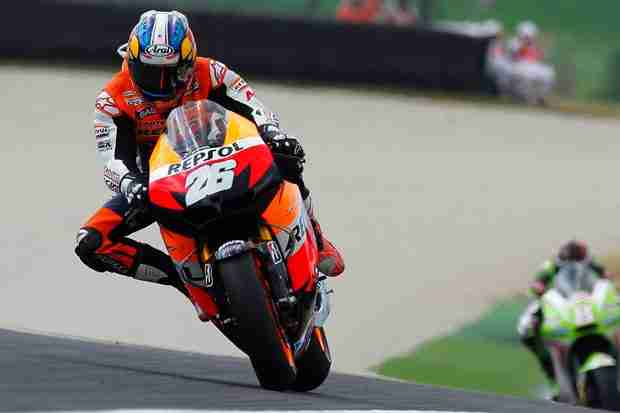 Second after the two practice sessions yesterday, Dani Pedrosa went up by another step in qualifying at Mugello today and will head the grid for the Italian Grand Prix. The Repsol rider put himself in the best possible spot for tomorrow’s race, at which his teammate Casey Stoner will start from the centre of the second row in fifth. Pedrosa has been very competitive all weekend and this morning the Spanish Repsol Honda Team rider set the second fastest of the third free practice session –behind compatriot Jorge Lorenzo. On the other side of the Repsol Honda Team garage, Stoner is still not feeling completely comfortable at Mugello with the harder tyre compound. It had seemed as if the issue had been overcome in the morning when he placed third, but the problem flared up again in qualifying.

The battle for pole was between Spaniards Pedrosa and Lorenzo, who exchanged the top spot on the timesheet throughout the session. Over riders such as Dovizioso, Spies, BarberÃ¡ and Crutchlow made cameo appearances, but when it was time for a final hot lap it was a two-way fight. It was the Repsol Honda Team rider who won out, taking his second pole position of the 2012 season. Whilst Pedrosa was fighting for the best time of the day, Stoner upped his pace but would have to settle for the fifth best lap of qualifying and a place on the second row.

“We definitely made another step forward today and to get the pole position here is great, although to always be on the front row is what really matters to me. We had a good practice in the morning and managed the timing well in qualifying to be on track when everybody started to improve the lap times. It will be a very hard race for sure, it’s very hot out there and the race pace will be also very high looking at the lap times this afternoon. I’m quite happy with the set up of my bike, we’ve had better grip today and I’m pretty confident, but we have to keep very focused and push at the maximum because Lorenzo has an incredible pace”.

“This weekend we’re just missing something, especially in the longer corners we just can’t get the bike to turn, we can’t stop the rear chatter in the exit and in the end we can’t put the lap together. We’re losing some tenths in each sector, if we get the bike sorted for one sector then everything should come together easily but it’s been a difficult weekend so far. We still have tomorrow morning to improve our set up and sort out a few of our weaker points, if we do then we might be in with a chance. I’m not too worried about second row, we’ll hopefully get a good start, see what we can do and try to hang with the guys at the front, but honestly at the moment Jorge and Dani are in a different level”.