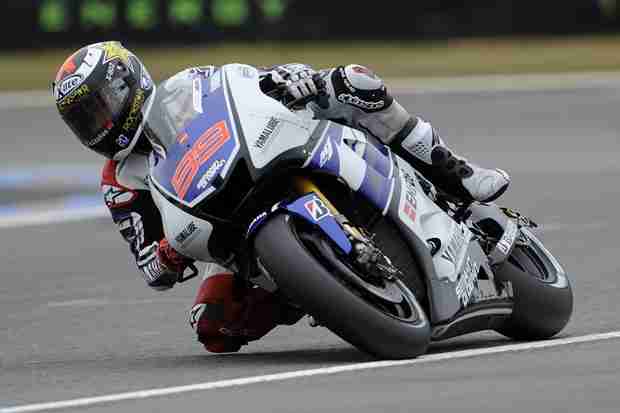 It took Jorge Lorenzo just a few corners on lap one to pass both the Repsol Honda riders on a wet and difficult Le Mans track. The Yamaha rider then cleared out and dominated the entire race with a highly spectacular pace completely unaffected by the tricky conditions and flew past the chequered flag with a massive almost ten second victory.

Sharing the podium with Lorenzo was a resurgent Valentino Rossi who took his Ducati Desmosedici to second place his best finish since he’s been with Ducati. If Lorenzo cleared out it in a race of his own, it was Rossi who reminded everyone why a MotoGP racing can still be exciting as the former 9 time world champion along with his strong competitor Casey Stoner put on a show that kept everyone on the edge of their seats. The Italian battled it out first with the Yamaha Tech3 duo Cal Crutchlow and Andrea Dovizioso, and managed to break clear of them once the problems with his foggy visor cleared and began to chase after Stoner. For the final five laps Rossi was all over the Repsol Honda rider. He tried twice to pass Stoner only to be immediately overtaken, but on the final lap he dived down the inside at the first chicane and closed down all the doors leaving an apparent struggling Stoner for the third place on the podium, and unable to retaliate. 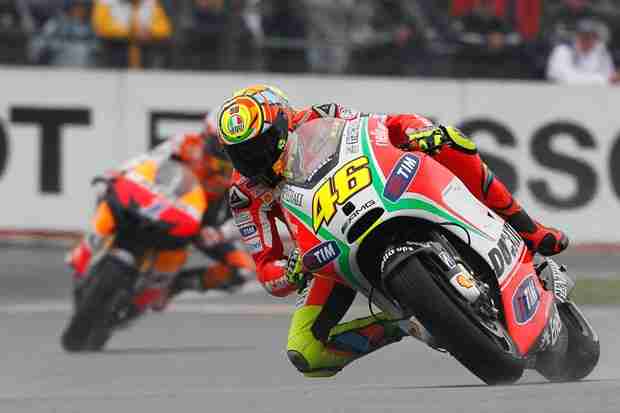 Dani Pedrosa who lead the race for the first few corners started to fade but he got gifted the fourth position after Cal Crutchlow and Andrea Dovizioso who had both battled with Rossi for third, crashed out. First Crutchlow at the Dunlop section and then just a few laps later Dovizioso, both were able to remount and finish 7th and 8th respectively.

The Yamaha Tech3 rider errors also gifted Stefan Bradl and Nicky Hayden with their fifth and sixth positions. If Hayden hadn’t had a bad start he would have been up front with his battling team mate and the Tech3 duo as his race pace matched theirs. Ben Spies endured another torrid race. The Yamaha factory rider was almost last at turn one as he found himself running onto the gravel and then was seen having problems with his clutch. He was pitted with still another problem, a fogged visor, he came back out and finished in a very lowly 16th place.