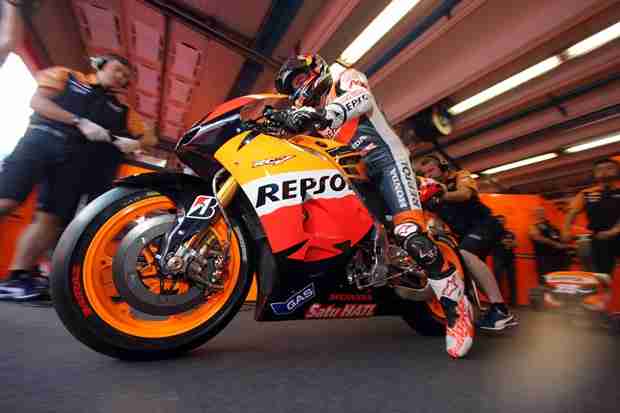 The North American circuit of Laguna Seca is the setting for the tenth round of the MotoGP World Championship. The 3.610km track features seven left hand turns and four right handers, including the attention-grabbing descending ‘Corkscrew’ turn that may be the most famous sequence on the MotoGP calendar. It was there that Casey Stoner passed Jorge Lorenzo for the victory at last year’s race in Repsol Honda Team colours, and the Australian returns to the US this weekend alongside teammate Dani Pedrosa in the battle for the world title.

The US Grand Prix is one contested solely between the MotoGP riders. Dani Pedrosa comes into the race second in the overall standings, following five consecutive podiums and a victory in Germany. He has only once placed outside the top three this season (at the French GP, in which he finished fourth) and he was on the podium at last year’s round at Laguna Seca. The Spaniard was the winner of the US Grand Prix back in 2009, beating Valentino Rossi.

Repsol Honda Team rider and third in the World Championship, Casey Stoner also has fond memories of the track. He won there in 2007 and 2011, in both cases en route to the title. Having missed out on the rostrum at the past two rounds, the reigning World Champion is looking to put in a performance to elevate him in the standings.

This race will conclude the first half of the season for the MotoGP class, which will return to action at Indianapolis after two weeks rest –accompanied by the Moto2 and Moto3 riders.

“I’m really looking forward to racing in Laguna Seca. The atmosphere there is fantastic and it’s a very particular track, nothing like what we are used to in Europe. Laguna is very small, bumpy and technical. Last year it was a very hard race for me due to the lack of fitness, so I hope to enjoy riding there again as we did in the past.

Honda has made a big effort to bring the new parts to Laguna so we’ll have our standard bike but we’ll also get the new engine and chassis we tested in Mugello and I hope we can take advantage of these improvements and have another good race”.

“I always look forward to going to Laguna, it’s a circuit we’ve enjoyed quite good results at and the atmosphere there is fantastic. The circuit is a very tight and technical and it’s definitely a positive that it goes around to the left, as we have less chatter on the left hand side. However, some of the most critical corners are right handers so it depends how we can get the bike set up before I can say if we’ll be competitive.

We’ve had a nice short break since Mugello and we’re looking to improve on our results from the last two races. HRC have worked hard in Japan to provide us with the new engine and some parts from the test, hopefully we can have three dry sessions to get some work done and be competitive for Sunday, but we’ll have to wait until we get on track”.