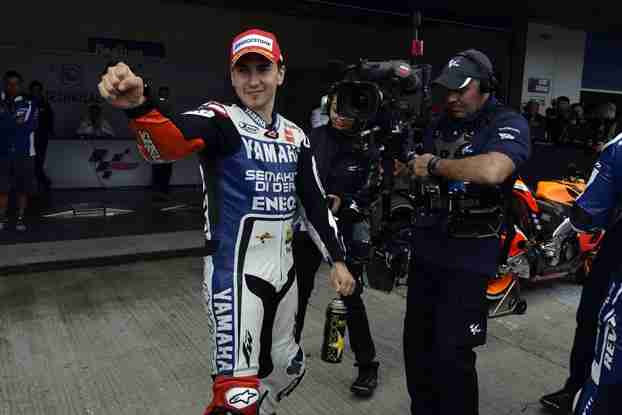 Yamaha Factory Racing rider Jorge Lorenzo is yet again the man to beat after a thrilling qualifying session for the Grand Prix of Spain at Jerez this afternoon. Race fans witnessed an incredible 29 changes of provisional pole position as the riders fought it out on ever changing track conditions. Lorenzo was initially off the pace, running outside the top ten as dark clouds and a damp track threatened to ruin any chance of an improved time. Some small set up changes and fresh rubber combined with the Mallorcan’s trademark determination saw him climb quickly up to the top spot, a position that was then hotly contested until the last moments of the session. Lorenzo finally beat fellow countryman Dani Pedrosa to pole by 0.135 seconds.

Ben Spies took his YZR-M1 to sixth in qualifying, working hard to deliver the best possible position whilst avoiding falling victim to the constantly changing track conditions. With some corners remaining damp throughout, finding a perfect line proved to be extremely difficult. Having started outside the top ten along with his team mate, Spies climbed as high as third but was unable to keep the front row having used his fastest set of tyres slightly too early in the session.

“We are very happy with this pole position because it was a strange session. There were a lot of water patches and it was very dangerous. You had to pay a lot of attention, it would have been easy to crash and get injured. Anyway we start in first position so let’s see what happens in the race. Thank you to the team for working hard to keep giving the right set up in changing conditions.”

“It was actually a pretty scary session for everybody, the track started out damp and then got better but there were some damp patches right where you wanted to be. It was the first dry session of the weekend for us so we had to ride hard. We had a setting on the bike we hadn’t tested here but thought on paper it would be better, some things were good and some bad. We mistimed the tyres a little bit just because we saw a black cloud coming in so I think we could have been on the front row. I didn’t want to make a mistake though and throw another bike down the track and make the guys rebuild it! We’re pretty much up there, for how bad the conditions were I’m happy to come out unscathed and on the second row.”

“That was a great qualifying session for everybody, especially for us, grabbing pole after gambling a bit and starting and stopping a lot to make changes. The circumstances were changing constantly as were the positions. At the beginning we were a little bit afraid because we thought rain was coming but we were lucky and it stayed dry or we could have been tenth or twelfth. The riders all took some risks so it’s great to be on pole for the second time in a row.”

“It was impressive how much Jorge wanted the pole, I think it’s a good signal for tomorrow. Ben had a good feeling for the bike by the end of the practice and put a lot of effort in. We’re quite confident for tomorrow; a lot will depend on the weather forecast. The team has also been working really hard to keep up with the different conditions and keep delivering a competitive bike.”