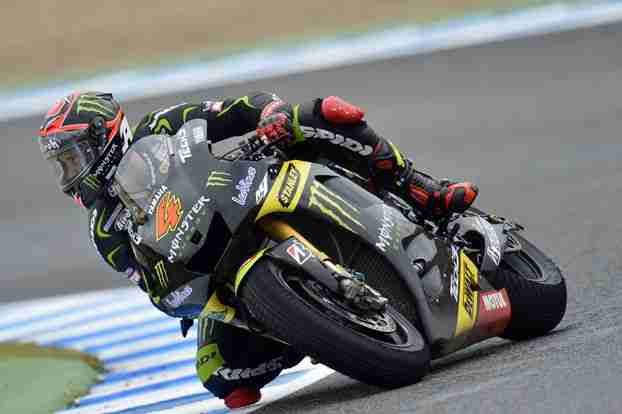 Monster Yamaha Tech 3 Team rider Cal Crutchlow produced another inspired qualifying performance at the Circuito de Jerez this afternoon to finish just 0.007s away from claiming a stunning second successive MotoGP front row start in 2012. Crutchlow stormed to his maiden front row in Qatar and he looked on course to repeat that fantastic achievement today in a qualifying session that took place on a dry track, as constantly changing conditions continue to dominate the Spanish Grand Prix weekend. After a rain-lashed third and final practice this morning, damp patches rema ined scattered around the track but Crutchlow started qualifying on slick tyres and the 26-year-old expertly assessed grip levels to settle into a fast pace. He topped the timesheets for the opening 20 minutes but Crutchlow slipped outside of the top three as the pace intensified with riders anxious to post a competitive time on slick Bridgestone tyres, with rain threatening to further disrupt preparations for tomorrow’s 27-lap race.

Conditions remained dry and lap times continued to fall and a brilliant lap of 1.41.646 put Crutchlow back on top of the timesheets before he crashed at Turn One with only 18 minutes remaining. The spill didn’t knock Crutchlow out of his fast and consistent rhythm and he moved back into third spot with a brilliant lap of 1.40.570, only to be denied a thoroughly deserved front row by 0.007s. Italian will start the first European round of the new 1000cc MotoGP World Championship heading the third row of the grid. Dovizioso successfully negotiated the damp patches in the early stages to challenge inside the top three but he will start from seventh position having not been able to find a set-up that permitted him to show his true potential. He ended with a best time of 1.41.180 to finish just 0.090s outside the top six.

“That was quite an eventful session to say the least and I’ve got to be happy with fourth position considering I had the crash. I made a silly little mistake because I hit one of the damp patches and crashed out. It was a high-side but I wasn’t even on the throttle. I think I was on the fi rst lap with a new rear tyre and maybe it wasn’t completely up to temperature when I hit the damp patch. I have to say a massive thanks to my Monster Yamaha Tech 3 crew because they did an awesome job to get the second bike ready. It was set-up for the wet in case it rained and they did a brilliant job to get me back out so quickly. It was disappointing from the point of view that I lost some time on track and without that I’m sure I could have challenged for the front row again. But fourth on the grid is not a bad result at all and I am looking forward to the race tomorrow. I’m confident I can be fighting to be inside the top five again but I hope it is a full wet or dry race and not the mixed conditions we had yesterday.”

“The changing weather conditions have not helped at all this weekend because I need time on the Yamaha to improve my feeling. Although I am very close to the top six I still don’t feel completely comfortable on the bike and that means I am not riding with my normal confidence. I need time and this weekend we haven’t been able to do that many laps in the dry. It is a pity because the conditions we had today is where I am normally very strong but I struggled. Cal has proven again today that the Monster Yamaha Tech 3 package is very competitive, so it is down to me to improve. Hopefully the race tomorrow is dry and we get a completely dry weekend in Estoril to help me make progress and get the best out of the YZR-M1.”