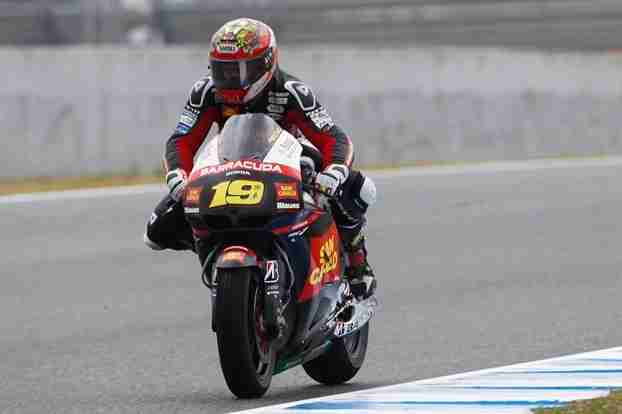 Mixed conditions again threatened to spoil the MotoGP action at Jerez today but in the end the rain stayed clear long enough for a dry qualifying practice. Alvaro Bautista’s day didn’t start out in the best possible fashion with a crash in the wet final free practice this morning but the Spaniard recovered his confidence to qualify eighth fastest in the afternoon. Michele Pirro, meanwhile, had a crash in the decisive session and struggled to get back on the pace on his second bike, qualifying fifteenth.

“Today was another difficult day. This morning we worked on solving our issues from yesterday but only made slight improvements. Then when we were trying a new setting the bike was vibrating a lot into the first turn and I lost the front and crashed. We were able to use the slick tyre this afternoon even though there were still some damp patches out there with the threat of more rain. After my crash this morning I didn’t want to risk more than necessary so a third row start isn’t bad and if we get a good start we can be fighting for a good result. ”

“It was a shame about the crash because I had to use the second bike, which I didn’t have a great feeling with. Luckily the track conditions had improved but my feeling still wasn’t as good and I almost crashed again. I saved it but hurt my arm and that slowed me down too. It is frustrating because we have had three wet sessions this weekend and not been able to do the work on the bike that we had planned. The guys are working very hard though and that has allowed us to at least take a small step forward.”

“To be honest we expected better today, especially from Alvaro, but we haven’t been able to solve our problems from yesterday. The crash didn’t help matters but I am still confident for the race because Alvaro always finds a little extra and I am expecting a good result from him. Michele was riding well on the CRT and we have taken another little step forward with it despite the crash. The aim is to improve from race to race.”