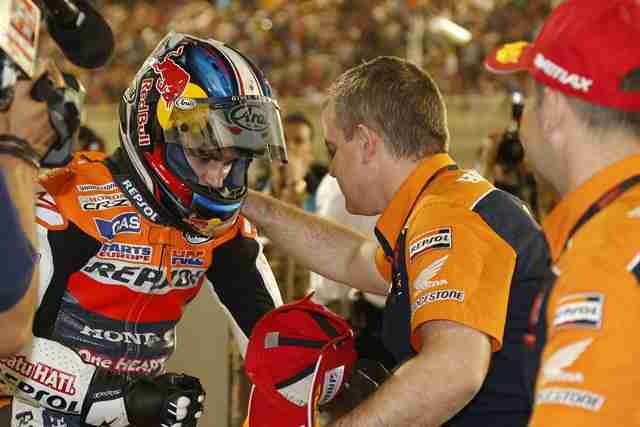 The MotoGP travelling circus pitches up at the Circuito de Jerez this week for the first European round of the season –at which the Repsol riders will be enjoying the unconditional support of the packed grandstands. The event follows a great start to the year in Qatar, where Repsol competitors won both the Moto2 and Moto3 races and MotoGP representatives Dani Pedrosa and Casey Stoner were on the podium.

The Repsol Honda Team begins the European tour with spirits at a high, thanks to the podium finishes by Dani Pedrosa and Casey Stoner –second and third, respectively– at the opening round of the campaign. The Repsol duo are also in good form at Jerez. Pedrosa is celebrating his 100th appearance in the premier class and has been on the podium in Southern Spain for the past seven seasons, whilst Stoner could make this round his seventeenth consecutive race on the rostrum. The last time that the reigning World Champion failed to place in the top three was precisely at this GP last year, in which he was taken out of action by a Valentino Rossi crash.

The Qatar Moto2 race showed that the class would once again be the closest category in the World Championship –and that Marc MÃ¡rquez hasn´t missed a beat. The Repsol rider won a tough battle in Losail which put him at the top of the standings, after a difficult preseason. The Spaniard was on the top step of the Jerez podium in 2007 when riding in the CEV Spanish Championship, but has only managed second place at the circuit so far in the World Championship.

A Repsol rider also leads the way in the Moto3 category –namely Maverick ViÃ±ales. Last year’s 125cc Rookie of the Year put on a masterclass at the Losail International Circuit and is looking for a fourth consecutive win this weekend. Miguel Oliveira joined ViÃ±ales in being unable to finish last season’s Spanish GP, but comes into this round on a high after claiming a career best fifth place in Qatar.

Teammate Ãlex Rins will continue his adaptation to the World Championship at a familiar track, joined by a familiar face in former CEV teammate and rival, Ãlex MÃ¡rquez. The latter won last weekend’s CEV race in Navarra and has been given a wild card spot in the two upcoming races.

“The pre season test at Jerez was positive for us, we had good feelings on the bike and finished happy, so I’m really looking forward to going there for the Grand Prix this weekend. We need to be very focused and have a good qualifying session in order to start the race in a good position.

I love the Jerez circuit and the passionate support of the Spanish fans, I hope the grandstands are full again as it adds to the unique atmosphere there. We had a great race in Qatar and to start the season on the podium is important, but we cannot relax, we will be aiming for another strong race this weekend”.

“After a difficult race in Qatar, I’m looking forward to Jerez. We had a very good pre-season test there, it’s a track that hasn’t been so good for me in the past so the fact we were able to hold a good pace there in testing has given us a lot of confidence. We still have some issues that we really need to resolve with the bike especially the chattering in the entrance and exit of the corner, when we solve these we believe we will have a very competitive package.

Since Qatar I’ve been working on the arm pump issue I experienced in the race and it’s definitely feeling better, we’ve treated it the same way as when I had it in 2010 at Silverstone so I’m hoping it won’t be a problem for us this weekend”.

“We head to Jerez happy and motivated. The win in Qatar gives us plenty of confidence, but we have to stay alert because the pressure and desire to do well in front of the Spanish fans could take its toll. The Circuito de Jerez is a track at which we rode in preseason and there are many riders who are fast there, so we will have to be 100% focused in order to have a good weekend.”

“The Spanish Grand Prix is always special. You are riding at home, you feel the support of the crowd and your motivation goes up a notch. This year is going to be even more special, because for the first time in my life I head to a Grand Prix as the World Championship leader. To be doing that at Jerez, you couldn’t ask for more.

The track is technical and combines slow and fast turns, but is well suited to my riding style. In testing just before Qatar we were fast here and established a fairly good setup, which gives us optimism ahead of this race. The season has only just begun, there are many races to go and it will be difficult to keep our form up all season. I can’t wait to soak up the great atmosphere of this race and to try and gain the good result that allows us to maintain a strong position in the standings.”

“This will be a tougher GP than Qatar, because in preseason testing we were a little bit off the best times. I believe in the team and I am sure that we will find a setting that allows us to be competitive. I liked the circuit more with the 125cc; on a Moto3 I’m finding things a little more difficult, but that is maybe to do with the chassis problem from preseason. I’m sure that we will improve.”

“This is going to be a completely different race to Qatar. The timetable returns to normal and I know this track. We were at Jerez in preseason and we had a good test, so we will see if we can find a good pace and do as well as possible. I hope to ride fast right from the opening practice sessions and improve the bike enough to occupy one of the top positions. This is one of my favourite circuits; it’s fast with a couple of slow corners. I think I can get a good result.”

“This Friday will mark my debut and I can’t wait, because this is a very special circuit for me. I’ll be up against some great riders who are quicker than us in the CEV. I am going to try and enjoy myself, learn as much as posible and gain experience. I haven’t prepared any differently to how I would for a CEV race. I am calm now, although I’m sure that on the grid I will be more nervous. I think we will do a great job at Jerez and have the chance to take a good result.”