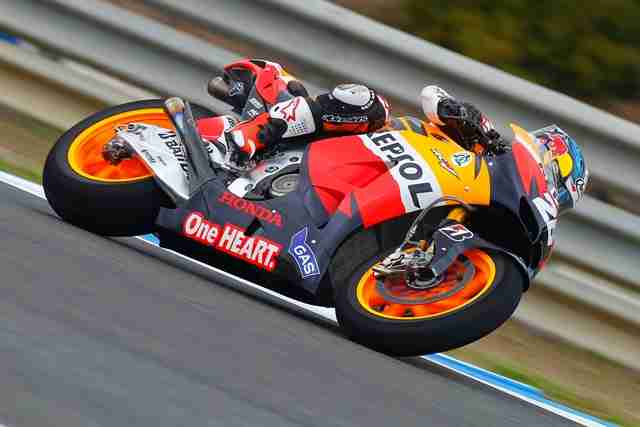 In a rainy day at the Circuito de Jerez, the Repsol Honda Team experienced two very different free practice sessions. In the first, the track started out dry before rainfall dampened the asphalt, with Dani Pedrosa and Casey Stoner both preferring to stay in the garage until the afternoon. In the second session, Pedrosa recorded the best time of the run, 1.326 seconds quicker than teammate Stoner in fourth.

‘Inbetween’ conditions are the bane of the MotoGP rider. That was the situation on day one at the Circuito de Jerez, leading to the majority of premier class riders not risking a crash in the first practice session. The Repsol Honda Team duo of Dani Pedrosa and Casey Stoner were two such riders, deciding to wait on an improvement in track aptness for the task at hand after considering the morning asphalt inappropriate for finding a good setting.

The rain became more intense in the second session, allowing the Repsol riders the chance to put fill wets on their Repsol Honda RC213V for a completely wet run-out. Dani Pedrosa dominated the session and became the first rider to go round in under 1’51, with a time of 1’50.780. The Spaniard was 0.660 quicker than second placed Valentino Rossi. Reigning MotoGP World Champion, Casey Stoner, rode 15 laps of the Spanish circuit and put in his best three times on his second stint, stopping the clock 1.326 seconds off his Repsol Honda team mate.

“It has been a strange day due to the weather conditions. In the morning we decided to not go out because the track was not wet enough then we had more or less the same conditions in the afternoon, but it was necessary to do some laps and get some rhythm. The first feeling on the bike was good for me, the bike felt good and I’m riding well but I hope we have better weather tomorrow, full dry or full wet.

Anyway, it is important for us to do a good qualifying practice tomorrow and we will need to be clever and quick because the conditions can easily change and in one minute can be the option to make the lap time for the pole and one minute later can be a disaster. So let’s keep focused and try to do a good job”.

“It’s been a strange day, but at least we managed a few laps to get some sort of feeling in wet conditions. We came back in to try and change the bike to give more rear grip but by the time we went back out it was already starting to dry a little and the conditions were constantly changing and we couldn’t really get a good understanding of the bike.

Towards the end we were fast compared to everyone else but it didn’t really matter by then. it’s just been one of those days, not a lot to be taken from it, we know we have some things to improve if it continues to be wet, hopefully we can get some good track time tomorrow morning before qualifying in the afternoon. At the moment my arm feels ok, but it’s difficult to know when the conditions are like this as you’re not stressing it like in the dry”.