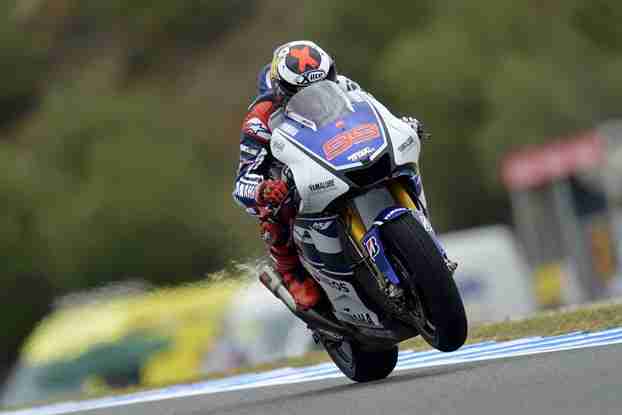 Today’s MotoGP qualifying session at Jerez went down to fierce battle for the pole position between two rival Spaniards, Yamaha’s Jorge Lorenzo and Repsol Honda’s Dani Pedrosa who were completely above the rest of the field for the entire session. Despite the difficult conditions, with scattered wet patches along the circuit, Lorenzo was able to take his first pole position of the season (his 20th in MotoGP) on his last flying lap with a best time of 1’39.532 and 0.2sec under the race lap record that left Pedrosa in second and 0.135s adrift.

When we say that the two Spaniards were a cut above the rest of the field, you just have to look at an excellent Nicky Hayden, took third place on the grid, but he was a little more than one second adrift. If Hayden was the best Ducati rider. the worst was Valentino Rossi who qualified in a lowly 13th. It was a disastrous session for the Italian, who was a massive 3.4 seconds from the top of the timesheets, but even worse, he was 2.4 seconds from his team mate and was behind Ducati satellite riders Karel Abraham and Hector Barbera, but CRT also rider Randy de Puniet finished ahead of all three Ducati’s in 10th.

Opening the second row will be Tech 3 Yamaha’s Cal Crutchlow. The Briton the fastest rider until the halfway mark, but a crash at the Expo 92 turn (that also caught out Colin Edwards and Michele Pirro) forced him out on second bike, but his lap time was good enough for a fourth spot. Reigning Champion Casey Stoner could only manage a fifth position on what he considers his bogey track. Ben Spies came out of his free practice slump with his 6th position, but he was more than 1.5 seconds from his team mate. Andrea Dovizioso was 7th followed by Alvaro Bautista and a very aggressive Stefan Bradl who was ninth.