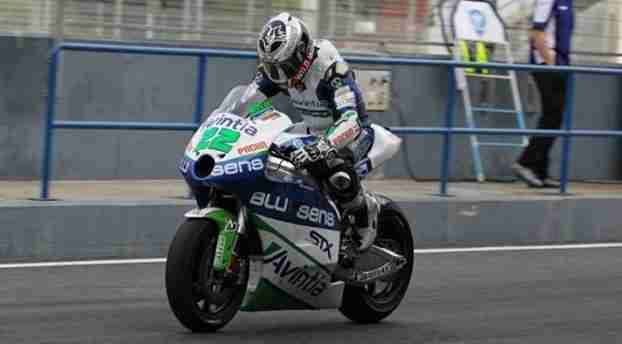 CRT Avintia Blusens rider Ivan Silva will be switching chassis for the upcoming Jerez GP. The Spanish team has decided to introduce a carbon fibre chassis designed by Inmotec, while team mate Yonny Hernandez will stick to the FTR frame, with both riders still using Kawasaki ZX-10R engines. Also switching chassis supplier will be Moto2 Avintia Blusens rider Julian Simon. The Spaniard has decided to drop the FTR chassis for a Suter. Simon is already familiar with Suter chassis, because his former Moto2 team, Mapfre Aspar switched from the Italian RSV to the Swiss manufacturer in 2010 after just two rounds.

Many will remember Inmotec, the Spanish firm who designed and presented a MotoGP machine and had ambitions of competing in the MotoGP championship during the 800cc era, but their prototype bike was never competitive enough. BQR (Avintia) and Inmotec had worked to together during the pre-season on an aluminum chassis, but in the end the team opted for FTR’s rolling chassis to start the season, even if we were lead to believe that the team had constantly tested their CRT bikes only with the British manufacturer’s chassis. Hernandez and Silva finished 14th and 16th in their CRT debut in Qatar.