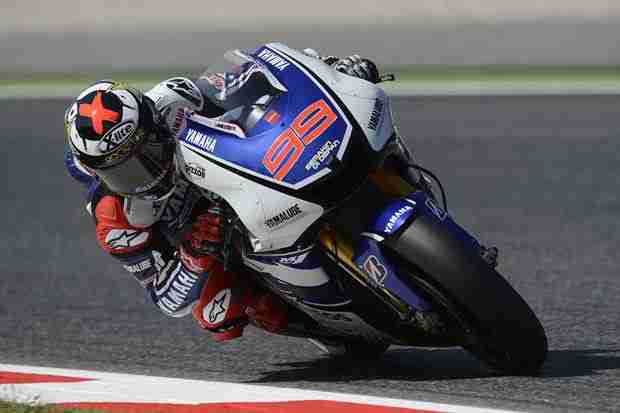 It was tight at the top in Catalunya today as the MotoGP elite battled in sweltering temperatures to qualify for tomorrow’s Grand Prix. Yamaha Factory rider Jorge Lorenzo was on typically fast form, breaking into the low 1’41s to take second on the grid. The Championship leader’s qualifying time of 1’41.441 was just 0.146 seconds from pole man Casey Stoner. Ben Spies was also on form for qualifying, narrowly missing the front row by just 0.004 and pole by just 0.257 seconds. The Texan starts from fourth place on the grid for tomorrow’s race having beaten local hero Dani Pedrosa by 0.104 seconds for the grid slot.

“It was very important to finish on the front row today because I knew all the riders would be pushing to the limit in qualifying. The lap times were very close but I managed to make a good lap. I almost crashed in T3 on my first hot lap on the bumps so second place is good for tomorrow. We still need a little good feeling on the front; we are struggling on some corners so we need to improve the feeling or it’s going to be difficult in the race. We would have liked to be on pole, but we are happy with the position.”

“That was a pretty good qualifying session. I’m a little frustrated as I lost a couple of tenths on one of the splits which would have put me on the front row. I think I had almost too much grip through T1 and T2 with the soft tyre! The bike is working really well, the team’s worked hard to deliver a good set up so I’m confident we can run a competitive pace and stay with it tomorrow. It’s going to be a tough race and I’m hoping the rain stays off!”

“A very exciting qualifying, second position on the front row is great and lap times were really good. There’s still some space for improvement as we are not completely happy with the base set up. Jorge had to fight hard for the front row and it was a spectacular session, let’s see what happens tomorrow.”

“I’m satisfied with today’s results. For sure pole is the target but we have a good pace in general. Ben was reasonably happy with the set up yesterday but the team managed to improve it even more for today. We are pretty optimistic for tomorrow. The weather forecast means it might be a little different but we are ready in any case.”