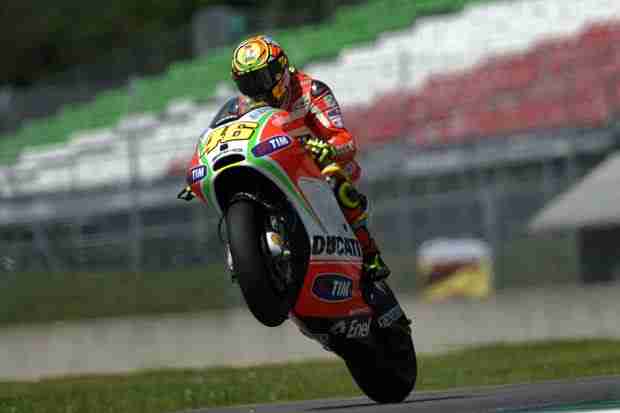 In Barcelona today, the Ducati Team completed the first of two days of testing scheduled to take place in Spain this week, and tomorrow they travel to Aragon, where they’ll take to the track again on Wednesday. Nicky Hayden and Valentino Rossi completed 78 and 56 laps, respectively.

“It was definitely nice to get in a good day of testing, even if it was mainly just confirming things like fork settings, geometry and a couple of electronic settings. It’s a shame we got a red flag at the end of the day because we had one new tyre ready so that we could go out one last time and check to see if we had made any real progress, but that’s how it goes. Nonetheless, it was definitely a useful day. Now we’ll move on to Aragon and give it a go there.”

“We didn’t have much new stuff, so we concentrated on testing settings, trying many different configurations. In the end we understood that the setup we settled on for yesterday’s race was really the best one for this track. We tried the aluminium swingarm, which could help us in terms of grip on acceleration, but it triggers too much chatter, as opposed to during the Mugello test, where it proved to be advantageous. It will be interesting to try it again at Aragon on Wednesday.”