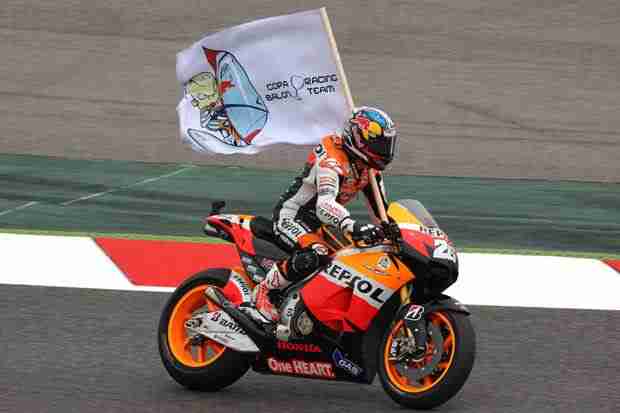 Spurred on by a local crowd, Dani Pedrosa got off to a fantastic start at the MontmelÃ³ circuit just 30km from home. The Spaniard pushed his way to the front of the order from the second row, leading out of the first corner of the Catalan GP. He had made up four positions on the opening lap and was looking to make a break for it. Casey Stoner had taken off from pole, but his start was less successful and he was out of the front group early on.

The first half of the race belonged to Pedrosa, as he set the pace for the rest of the MotoGP riders to follow. Only Jorge Lorenzo and Andrea Dovizioso were able to keep up with him, whilst Stoner spent the majority of the race in fourth position, fending off the challenge of Cal Crutchlow.

On lap nineteen, Lorenzo made the most of a small mistake from Pedrosa and took the lea don the inside. The last five laps featured Lorenzo escaping on less worn down tyres, extending his advantage to just over five seconds at the line. Pedrosa took second for his fourth podium in five races. Stoner was sandwiched between Yamaha Tech3 riders Dovizioso and Crutchlow, but still had a shot at the podium. He took risks on the final lap in an attempt to get onto the rostrum, but was just missing 0.183 to pass Dovizioso after making up over 1.5 seconds on the Italian. This was the first time in six seasons that Stoner has been outside the top three at the Catalan Grand Prix.

Jorge Lorenzo maintains the lead of the standings in MotoGP with 115 points, 20 more than Stoner and 30 more than Pedrosa, second and third in the series, respectively.

“A second place is always a second, but I really wanted to win today, I cannot feel happy. We’ve worked very hard during the practice sessions to be ready to win but finally we couldn’t make it, so it’s a little bit disappointing. I pushed as much as I could but in the final laps I had some issues to stay on the racing line. I pushed my best in the middle of the race, I tried to attack but with 10 laps remaining I couldn’t keep the pace, it was hard to control the bike on braking and in the exit of the corners, so I was defensive because I knew my corner speed was not so good.

I made a mistake and I had a big wheelie, so Jorge got past me and I couldn’t follow him. We cannot be happy today, but I have to congratulate my team because they worked very hard this weekend and we have to keep pushing for the next races to start winning soon”.

“I’m a little disappointed, we gave it everything at the end but we just didn’t have the pace, especially in the beginning with the hard tyre. It seemed that only Dani could really make that tyre work today and he made it work better than us. With the performance we had during the weekend we expected to be a little stronger throughout the race, we knew the beginning was going to be tough but we believed that towards the end we would be able to run a higher pace.

We weren’t sure if the softer tyre was going to be a problem for us in the race so we took the safer option today. We thought we had a better bike and better pace, but it didn’t come together. Still we came home with some points and we have the test here tomorrow to work on the chatter issues so I’m sure we’ll be back fighting at the top again soon”.