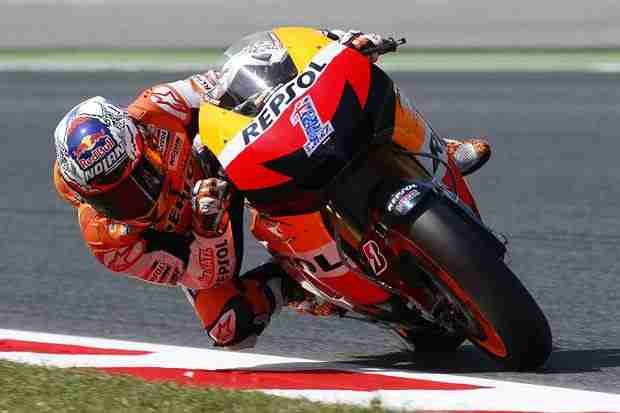 A scorching qualifying session for the Catalan Grand Prix, in which track temperatures reached some 52ºC, ended with Casey Stoner at the head of the standings. This is Stoner’s second pole position of the season, after the Estoril round at which he later won the race. His Repsol Honda teammate, Dani Pedrosa, will take off from the second row after recording the fifth quickest time in qualifying.

The Australian began the session in strong fashion and led the way after just three laps, imposing his authority on the rest of the field. He dominated the session until, with ten minutes left on the clock, the riders put on softer compounds in order to fight for pole. Dovizioso and Pedrosa had their turns on top, but it was just two minutes later that Stoner clocked his definitive 1’41.295 lap which awarded him the prime spot for tomorrow’s race.

Dani Pedrosa earned a second row start, despite having led the standings with his last hot lap. He had a run-off at turn 10 when trying to improve his time yet further, and the Repsol rider eventually claimed fifth after notching up a time of 1’41.656, three tenths off Stoner as the Australian took his second pole of 2012.

“It was a difficult qualifying session because I spent a major part of the hour testing the used soft tyres and I was down in the classification. But I was not worried because I knew that I had two new soft tyres for the end of the practice. When we put the first one on, I immediately improved my lap times and I jumped to second place then on my final flying lap I broke too late, I had a big shake on the bike and I ran wide.

From this side it’s a pity because I missed my chance at pole position or, at least, the front row of the grid. Anyway, I’m happy with the work we did yesterday and today’s preparation for the race and for me this is always the most important thing. Let’s see if together with my team we can improve the bike slightly for tomorrow and be ready to give 100% in a hard race”.

“We used the qualifying as an extended practice session as we don’t always have enough time to do everything during the 45 minute sessions. This morning we did a lot of work with the hard tyre, so in the afternoon in these hot conditions, we worked more with the softer one to get a clearer understanding if we can run with it for race distance. We were in and out a lot during the session trying a few different things, hoping to reduce the chatter which is still proving to be a problem, as soon as I touch the throttle the bike starts to chatter in the rear and it’s making things very difficult.

Towards the end of the session we managed to improve it slightly but I think we need to make another step before the race. Tomorrow, for sure tyre degradation is going to play a role so we’re going to have to wait and see but I’m happy to start from pole”.