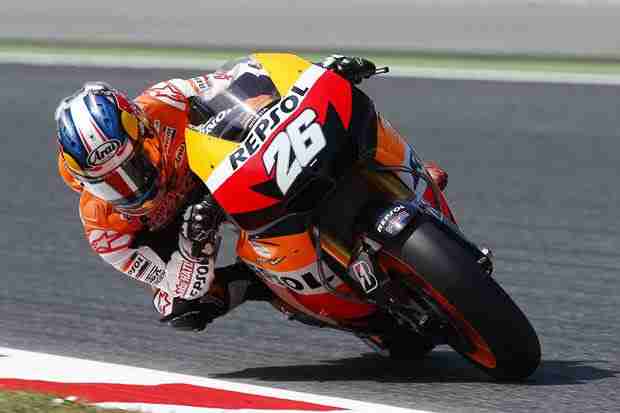 Friday was a day of contrasts for Casey Stoner and Dani Pedrosa, as they dominated the opening practice session for the Catalan GP and placed lower down in the afternoon run. The duo were first and second, respectively, in Free Practice 1, before switching to hard tyres in the second practice. Pedrosa was seventh in the afternoon and Stoner eighth, with their times eeighth and sixth in the combined standings.

The first practice session was almost perfect for the Repsol Honda Team. Casey Stoner was fastest in the session and Dani Pedrosa was just behind, as they were the only riders to go round in under the 1’43 mark. On his last run of the morning, the Australian clocked an impeccable lap, taking the fastest time in each of the sectors for a lap of 1’42.775. Team mate Dani Pedrosa was just a tenth of a second off his teammate, with his best time coming on his fifth lap.

The second session was affected by high temperatures on track. 29ºC ambient and 51ºC track temperature made conditions highly demanding and, whilst most riders went for softer tyres, the Repsol Honda Team went for the hard compound. Pedrosa went 5 thousandths of a second quicker than in the morning, whilst Stoner put in a fastest time of 1’43.134 from his sixteen laps.

“Our main target today has been to properly test the tyres because it will be very important to make the right choice for the race. Here in the past, the soft tyre worked quite well with high temperatures, but we still don’t know how long it will last. I did the whole morning practice with the softer compound and I kept the hard in the afternoon and I felt good with both. My lap times were almost identical in both conditions, and the riders in front put the softer at the end, so I’m not worried with my position today.

It’s also true than they have improved the times by a second, so we will need to understand better if the softer will last the race distance. 25 laps are a lot, you spend a lot of time on the edge of the tyre and it’s important to keep them ‘fresh’ until the end. We will keep working on some details tomorrow morning in order to be ready for the qualifying”.

“It’s been nice to have some good weather and consistent conditions. It’s very hot on track and I think everyone is struggling a little on the soft compound tyre. This afternoon we used the harder tyre and they seemed to be a little more consistent. We’re still not very happy with how the bike is feeling and we can certainly improve on that but we’re fairly happy as far as pace is concerned.

Everyone seemed to treat this afternoon’s session like it was qualifying, using the softer tyre but in the end this is their choice! There are lots of things to try before qualifying tomorrow, we need to continue working on reducing the chatter and a few other things, but in general we’re pretty happy”.