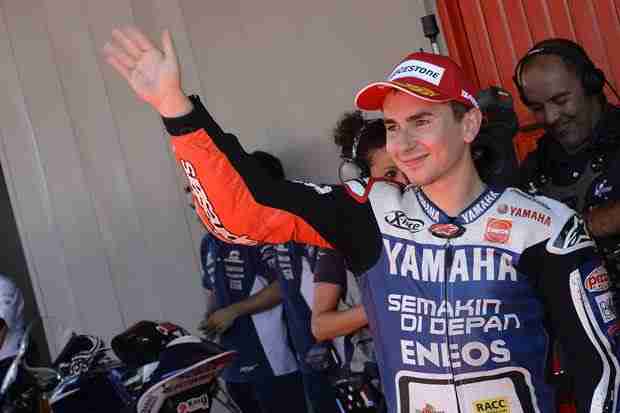 Jorge Lorenzo took his second consecutive win, in the fifth round of the MotoGP championship at the Catalunya circuit today under cloudy skies. The Yamaha rider further stretched his lead in the championship by +20 points after a hard fought battle with a super fast Dani Pedrosa for ninteen laps. The Repsol Honda rider got ahead of an aggressive Ben Spies by out braking him at turn 3 and making Spies run wide into the gravel.

With Spies out of the way Lorenzo caught up with Pedrosa and tailed him for several laps with the two exchanging the top spot after a first error by Lorenzo and then by the Repsol Honda rider whose bike wheelied with six laps to go which pushed him wide and that changed the outcome of the race, as Lorenzo was able to edge away and take the victory with a five second margin.

Today’s dark horse wasn’t Cal Crutchlow as expected, but his Yamaha Tech3 team mate Andrea Dovizioso who took the third spot on the podium taking advantage of Casey Stoner’s problems and he was the first satellite rider to podium since last year.

The Australian finished fourth and it was his first time off the podium since last year’s Jerez GP when he was taken out by Valentino Rossi. Stoner was never in the running for a podium spot as he couldn’t find the same pace as the front runners, but he managed to get closer to the Italian only in the final laps when Tech3’s rider soft tires dropped off and he began struggling.

Cal Crutchlow took fifth after tailing Stoner for almost the entire race until his soft tires began dropping off. Alvaro Bautista sliced through the field to claim sixth, while Valentino Rossi who shadowed Bautista until the closing laps finished seventh. Behind Rossi came LCR Honda’s Stefan Bradl and Ducati’s Nicky Hayden in ninth but he was 30 seconds from Lorenzo and almost 12 from his team mate. The best CRT rider was Aleix Espargaro followed by Gresini’s Michele Pirro while returning Colin Edwards had to retire.