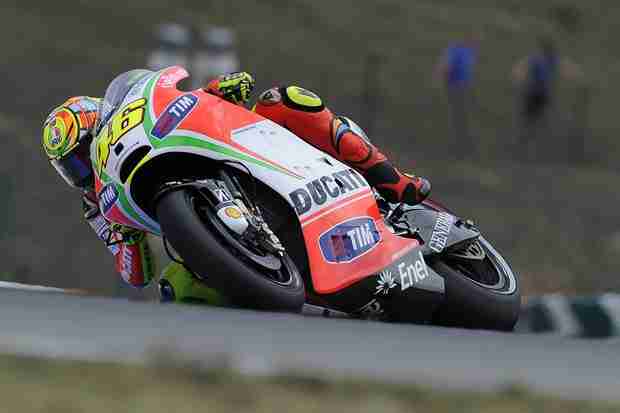 The Ducati Team today began its preparations for Sunday’s Czech Republic Grand Prix, with Valentino Rossi posting the sixth-best time in the first two free-practice sessions. On a sunny day with mild temperatures, the Italian rode at a good, consistent pace. On his fastest lap, his gap to the front was under half a second. In the meantime, Nicky Hayden reported from the U.S. that the hand he injured in Indianapolis is improving and that he is confident he’ll be able to return for the Misano Grand Prix.

“I’m happy because we went pretty well today, and in particular, the gap to the front makes us fairly optimistic. This is a beautiful track that I like a lot. It’s where I got my first win and my first world title, and we were also pretty strong here last year on the Ducati. Both of today’s sessions were good. We worked well, trying to find the best setup compromise for this circuit, and when we put on the soft tyre, we were finally able to improve the performance and to do a number of laps not too far from the leaders’ times. The pace is also decent. The riders ahead certainly still have some margin, so tomorrow, in addition to choosing which tyre to use in the race, we’ll have to try to improve a bit ourselves as well. At the moment, the soft is performing better, but we’ll see.”