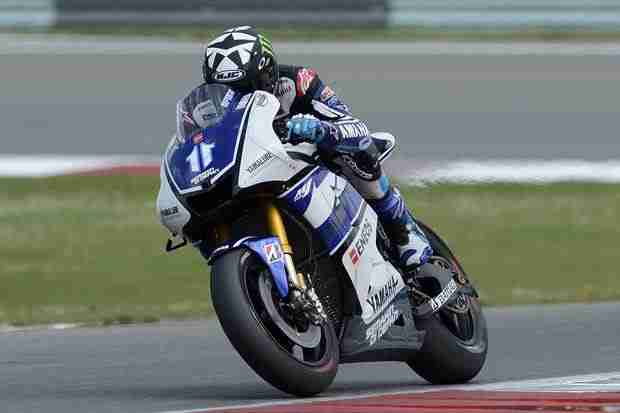 Yamaha Factory Racing’s Ben Spies took fourth today at the Assen TT in a tough race which again saw him suffer with tyre issues. The Texan made a strong start and was running in third behind Casey Stoner and Dani Pedrosa for the majority of the race. A brief battle saw him hold position over a chasing Andrea Dovizioso and he was beginning to stretch a lead when a serious tyre issue struck. As a result his pace was compromised, allowing Dovizioso to pass and leaving him fourth at the line. The result delivers Spies 13 points to bring his tally to 48 and promotes him one place to 10th in the Championship standings.

Team mate Jorge Lorenzo’s Assen TT was brought to a disastrous end at the first corner. The Championship leader was taken out by an over eager Alvaro Bautista, coming in too hot and taking both himself and Lorenzo out.

“Today the bike was good, I struggled with some front grip in the beginning but was able to ride around it. I managed to stay past Dovi and ride at my own pace then about seven or eight laps from the end I was pushing to get away. A chunk came out of the tyre and then a second; I couldn’t do anything about it. I was hoping Dovi would get past me as I was worried the tyre would explode and I didn’t want to fall right in front of him. We’ve made some mistakes early in the year but the last two weekends we’ve had a bike to be on the podium but issues have prevented it. The bike and the team are working so well and I’ve been really comfortable on it so it’s disappointing.”

“Well, today was a complete disaster, Alvaro’s move was crazy. I met him after the incident, he apologised and we shook hands but in my opinion this is not enough to justify the accident. When I made a mistake in Japan in 2005 I was penalized with a race. Race Direction told me that he will start from last position on the grid in Sachsenring but this is nothing. We hope that we will be lucky in the future that nothing will happen but if the riders are not penalized properly then they will continue to do crazy things like today. My leg is a big bruise, a big impact but nothing serious happened. Luckily for us we had a 25 point advantage or we would now be far behind. Now we are at zero with Casey so we begin again, the Championship is long so let’s see what happens.”

“A very stupid accident, a too early attack by Bautista resulting in a big mistake. Luckily Jorge is uninjured which is pretty much the only positive thing to take from the race. We lost 25 points so we start at zero again on equal points with Casey. Let’s see how we can change that next week.”

“I think MotoGP riders should be more cautious and know that the race is 26 laps long, not just the first corner. Fortunately Jorge had no serious injury but it has cost him a lot of points. I thought it was going to be a good race for Ben but a technical problem with his tyre compromised his results. It’s definitely not the weekend we forecast but sometimes races are like this. We’re looking now to the next GP to get back what we lost here.”