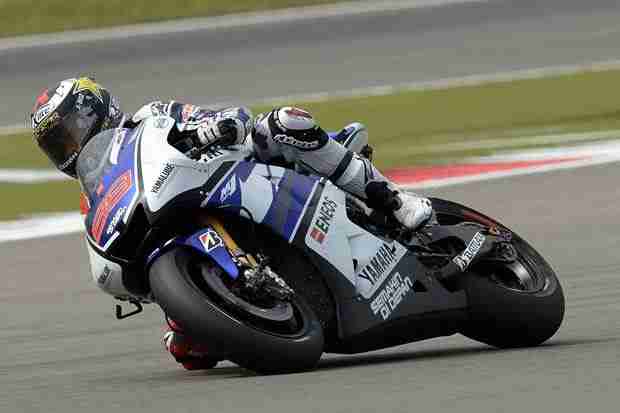 Yamaha Factory Racing’s Jorge Lorenzo took third today in qualifying for tomorrow’s Assen TT race. The famous Dutch weather proved to be the biggest challenge for all riders with rain intermittently halting the session and frustrating attempts to string together a series of hot laps. The sun came out to provide a final six-minute flurry of activity with Casey Stoner setting the provisional pole time. Lorenzo then responded, taking red through the first three splits but making a small mistake on the final chicane to end up in third on the grid for tomorrow’s race.

Having wrapped up day one as the fastest rider Texan Ben Spies was again ready to deliver in qualifying. Having worked through different set up solutions Spies was on pace for a front row position until running into slower CRT traffic on his hot lap. As a result he starts from the second row of the grid in sixth position.

“I tried my best in the last lap of qualifying but I made a little mistake in the last chicane on braking and lost a few tenths. I was surprised at Casey’s last lap; it was fantastic and so fast and Dani was also very close to him. We have a good position for tomorrow on the front row and we have a good race pace and I’m confident with the bike so I’m happy. Qualifying is one thing but the race is another, tyre choice will be important for the race.”

“Qualifying was a frustrating experience. We tried a setting this morning and went backwards so the first bit of qualifying we tried a modified setting from yesterday which again wasn’t working so well. We went back to yesterday’s set up with a minor change but only got one lap in, which turned out to be my fastest lap. Unfortunately one of the CRT bikes got in the way on my qualifying lap. I know they are out there trying to do their thing as well so it’s difficult.”

“A very Dutch qualification I would say, having to stop the practice because of the constant weather changes. Finally the last ten minutes were exciting and Jorge managed two hot laps. I think we are happy to be on the front row, Jorge’s first three splits were very good then he missed the last one otherwise he would have been pole. Race rhythm is very good so we are confident for tomorrow.”

“The rain didn’t help so much today. Ben was on form for a best lap until T9 when he caught a slower CRT rider who closed the door on him and he lost his lap. I think he could have had a better position but in the end second row is not so bad. He’s had good starts in the last races so we expect the same tomorrow. The pace is good, bike set up is good and we don’t have any doubts about the tyres. Jorge showed a good pace with both soft and hard tyres so he will be there in the fight for victory.”