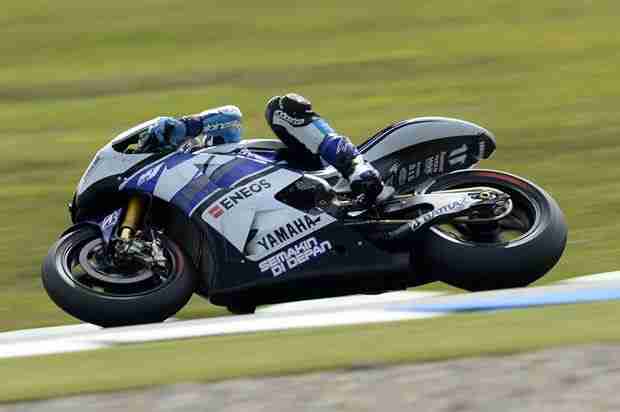 Yamaha Factory Racing’s Ben Spies began his Assen weekend today with a confident turn of speed to wrap up the first sessions as the fastest rider. The 2011 Assen race winner put in a productive simulation run in the afternoon session on the harder tyre before switching to the soft to take the top spot on the time sheets with a 1’34.866 lap.

Team mate Jorge Lorenzo was also quick to get up to an impressive speed today. The Championship leader finished the morning session as the fastest rider and led the majority of the second session as well. Lorenzo was only overtaken when others switched to the softer option rear tyre whilst he remained on the hard. He finished the day in fifth position but less than two tenths from Spies in first.

“Today was a good day, both this morning and this afternoon. In the second session we did almost race distance on the tyres in case it rains tomorrow to be ready for Saturday. We had quick times and then tried the soft tyre at the end of the session and were able to put down some quick laps with over race distance on the front tyre. The bike feels good so we’re going to continue on this path and try to make the bike even better for tomorrow and Saturday.”

“The feeling is pretty good with the bike, we started in a good way this morning and were fastest. In the afternoon we were fastest for most of the session but finally the riders who switched to soft tyres went in front of me. We concentrated on improving the pace with a race tyre and I think we succeeded. We have a good package and I’m confident with the bike which is important.”

“A very good first day at Assen and great weather too! The bike is behaving really well, this morning we were quickest and Jorge was even a little faster in the afternoon session. We were very consistent so a happy team and a happy rider.”

“A great start to the weekend, we completed a long race run successfully and Ben is pretty happy with the bike set up. We just have some small details to try and improve but we are close. Jorge was as usual showing a good fast consistent pace so a strong start for Yamaha.”