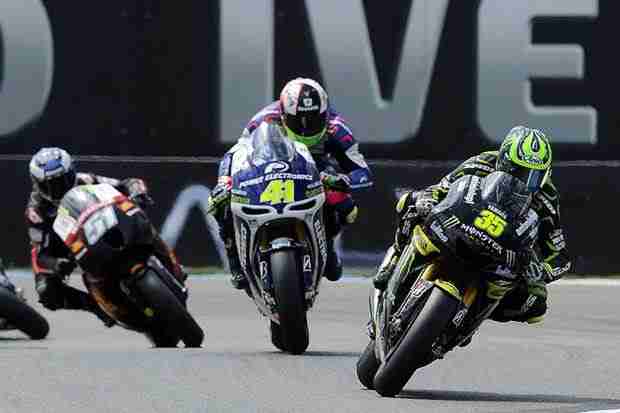 The Monster Yamaha Tech 3 Team celebrated another fantastic podium finish in the historic Dutch TT this afternoon after Andrea Dovizioso stormed to third position in front of over 90,000 fans. The Italian claimed his second podium in the last three races after prevailing at the end of a thrilling fight with American rider Ben Spies on the final lap.

A terrific start from the third row of the grid instantly put Dovizioso into podium contention as he grabbed fourth behind Spies, Casey Stoner and Dani Pedrosa. Dovizioso then piled intense pressure on Spies and he moved into third place on lap eight.

Dovizioso pushed his Monster Yamaha Tech 3 YZR-M1 to the limit but he was unable to streak away from a determined Spies, who seized third back on lap 12. Dovizioso then shadowed Spies for the remainder of the race, waiting until the final lap to pounce with a clinical overtake that secured his second third position of the 2012 World Championship campaign.

Cal Crutchlow produced another heroic performance to finish fifth in the 26-lap encounter, the British rider defying the pain from a broken left ankle he suffered in a practice crash at Silverstone to fight his way through from last position. The 26-year-old was fortunate to miss a first corner inc ident involving Jorge Lorenzo and Alvaro Bautista, but in taking evasive action to avoid the Spanish duo’s collision, he was forced to run off track. Crutchlow ended the first lap down in 12th but he demonstrated his fighting spirit to catch a battle involving Valentino Rossi, Hector Barbera and Nicky Hayden for fifth after just five laps. Crutchlow’s stunning early charge saw him set the third fastest lap of the race on lap four and he had swept into fifth place by lap 16.

Crutchlow’s sixth top five finish of the season ensured he remains in fourth place in the World Championship rankings and again he demonstrated the pace that would have certainly put him in the hunt for his maiden MotoGP rostrum had it not been for his unfortunate early off-track excursion.

“Scoring a podium for us feels like a victory and today is another great day for me and the Monster Yamaha Tech 3 Team. This podium is great because I have never had a very good feeling at this track but with the Yamaha YZR-M1 I felt much more comfortable. I was only seventh on the grid but I knew all weekend my race pace was very fast and I always felt a podium was a realistic goal. I got a good start and it was a beautiful battle with Spies for the whole race. It was a really strong battle and the pace was very high and when I passed Spies for the first time I tried not to abuse the tyres too much because I knew the first two were already too far ahead. I dropped my pace and it really paid off because at the end of the race I was much stronger than him and it seems he apparently had some issue with the rear tyre. I want to say a huge thanks to my crew because onc e again they have done a fantastic job. We work a lot to be competitive for the race and this strategy is really paying off because in the last four races now I have been fighting for the podium. I also want to thank Yamaha for the great support they are offering us. Now I’m really looking forward to the next two races, particularly my home race at Mugello, because after fighting for the podium consistently I am confident that I will be able to repeat this performance another time.”

“Once again I am contemplating what might have been because without the incident at the first corner I had the pace to be on the podium today. I was actually quite lucky to avoid being collected by Alvaro and Jorge but I still had to run off track and I was last. I’m glad Jorge was not hurt because the job he has done for Yamaha this season has been incredible and he didn’t deserve that today. Alvaro was way too fast and I know he didn’t do that intentionally but you have to be sensible when braking from high-speed for a tight first corner like that. Like in Silverstone I was right at the back but just decided to get my head down and recover as many places as possible. I had a really good battle with the Ducatis but I had a faster pace, although I had one big moment when I lost the front on lap eight and had to do all the hard work again. To be at the back and still come through to fifth is a fantastic result. But there is no doubt I should have been in the battle with Andrea and Ben. With my ankle still causing me a lot of pain and coming from last to fifth, I can’t be too disappointed and I leave here still fourth in the World Championship and that is very important.”

“We have mixed emotions after that race. On one side we are ecstatic because Andrea is back on the podium again and he rode a fantastic race. His pace was impressive throughout and he definitely deserved to be on the podium. It is not an easy job to fight against the factory bikes in MotoGP and the way he chased down Ben in the last four laps was very exciting. We were just hoping that he had enough time left to pass Ben and his timing was perfect to get third on the last lap. Andrea saved his tyres well and he is really showing his class at the moment. With a bit more luck he might have been on the podium in the last four races, so I am really pleased with the job Andrea is doing for the Monster Yamaha Tech 3 Team. We are a little bit disappointed though for Cal, even though he rode another phenomenal race. He showed again he had the pace for the podium but he had to run off track at the f irst corner to avoid the incident with Jorge and Alvaro. It is a shame because I have no doubt he would have been in the battle with Andrea and Ben. But he never gives up and that is a great quality of his. He was last like in Silverstone but fought incredibly hard to get back into the top six and he deserves a lot of credit. I am sure it is not going to be long before Cal gets his first podium but to have both of our riders back in the top five is a great achievement. After seven races we are third just 35-points behind the official Yamaha Factory Team in the Team World Championship. That confirms the incredible support we get from Yamaha but also the wonderful job Andrea and Cal are doing.”