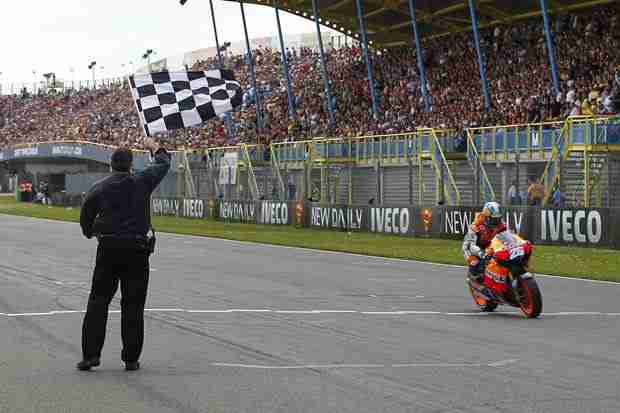 The MotoGP World Championship put the finishing touches to a fantastic Dutch TT weekend. A podium double for the Repsol Honda Team from Casey Stoner and Dani Pedrosa capped off what had been a successful day of racing for the Spanish energy company, following on from wins for Marc MÃ¡rquez in Moto2 and Maverick ViÃ±ales in Moto3. The MotoGP result also spices up the World Championship standings, as Stoner pulled level with Jorge Lorenzo at the head of the classification after his rival DNF’d at Assen.

Starting from the first and second spots on the grid, Casey Stoner and Dani Pedrosa remained in the lead at the opening corner. It was Pedrosa who again made a perfect start, taking the holeshot. That put them out in front, and also took them away from an incident in which Ãlvaro Bautista bowled Jorge Lorenzo out of the race after misjudging his corner entry.

From the opening laps, the Repsol Honda Team duo began to open up a gap and broke free from the pack on their own. The victory was still to be decided in what was a race of two halves: Pedrosa led and even clocked the fastest lap of the race, but it was the reigning World Champion stuck with his teammate, passed him with ten laps to go and took win number three of the season.

Pedrosa missed out on a chance to pass Stoner back after a small mistake. Second place went his way and he gained ground in the overall standings, led by Stoner and Jorge Lorenzo on 140 points and and with Pedrosa 19 behind with 121.

“Looking at the lap times we did during the weekend, I knew I had better rhythm than Casey [Stoner], so I made a good start and tried to pull away from the first laps. Casey stayed behind me all the time and by the second half of the race, I believe he took profit of extra energy he saved during the first part of the race to overtake me. Our pace was very good in the race, the bike worked very well but maybe I just chose the wrong strategy this time.

At the end of the race, the bike felt heavy with change of direction due to tiredness and it was enough to slow me down from 1’35 to 1’36 for just two laps, and I lost ground, but this is racing. I hope to do a better strategy next week in Germany”.

“To take pole position and now the win is really incredible, a big thanks to my whole team who never gave up. My plan was to get a better start than I actually did, take some advantage and use the energy I had to try and make a gap and try to hold on to the end. We also knew that which ever position we were in, we had to preserve the rear tyre. Choosing the softer tyre, there was a big chance that we would destroy it and have nothing left for the end of the race. When I saw Dani [Pedrosa] was running at a reasonable pace and we were pulling away from the others, I decided to stay there and watch him to save the tyres and my energy as much as I could. With 9-10 laps remaining, I knew we wouldn’t suffer a big drop in tyre performance, I still felt good so I decided to pass him and see if I could pull a gap.

It was a tough race, I had a lot of arm pump as I had to compensate for my injuries from the crash yesterday, but my fitness was good and the bike was working well in general. I’m sorry for Jorge [Lorenzo], nobody wants to take points over a competitor in this manner, but as we can see, one race can change everything”.