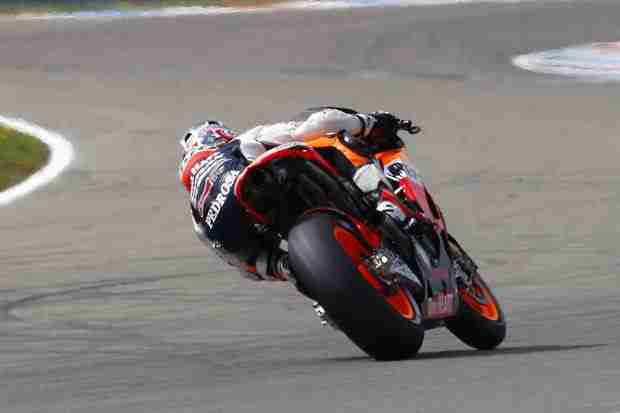 Few are the occasions in which an opening free practice classification has looked as close as that for this year’s Dutch TT. Held on Thursday in accordance with tradition at Assen, the first sessions on-track for the MotoGP field ended with Ben Spies in the top spot, Dani Pedrosa sixth and Casey Stoner seventh fastest on the combined standings. In the morning run, the Repsol riders began with a strong pace at Assen, ending the first 45 minutes of track time in second place (Pedrosa) and third (Stoner). They were 20 and 75 thousandths of a second down on the time set by Jorge Lorenzo in the competitive FP1.

The equality was repeated in the second session, in which Dani Pedrosa was 0.214 off last year’s race winner and today’s fastest rider, Ben Spies. Pedrosa put in 21 laps in the afternoon and was debuting –and dedicating his focus to– a new chassis brought by HRC to the Netherlands in comparative testing over the course of the day.

Teammate Casey Stoner was unable to improve his morning times due to a chatter problem on his bike, placing tenth in the afternoon. His mechanics managed to reduce the problem with the rear, but were unable to find a clear solution for the front and are still having difficulties with tyres. Stoner stopped the clock at 1´35.304 in the afternoon, 0.438 off the top of the timesheet.

“It’s been very good to have these temperatures in Assen and it really helps us to take profit of both practice sessions to work on the setup of the bike. We tried different things on the chassis to improve our feeling with the front tyre and we did many laps on both tyres, the soft in the morning and the hard in the afternoon. We are pleased with the steps we made today and I think we have a good basic setting to keep improving tomorrow.

Basically, we would like to get better traction to give us more corner speed. Concerning the chassis we tried, I felt slightly differences, but I still need to compare them a little bit more because we are looking to improve the performance with the front tyre and Assen doesn’t really have hard braking. It’s impressive that the lap times are so close from the first to the eighth position, it means that tomorrow’s qualifying will be tough and here it’s important to get a good position on the grid because the first corner is very tight”.

“We tried a few things with the bike but weren’t really happy with them. We tested another chassis but haven’t found many positives with it yet, in the morning if felt like we had slightly less chatter in the front, then this afternoon no real benefit, perhaps a little worse. In FP2 we couldn’t get any feeling from the rear and to be honest I felt a little nervous on the bike because from the first two exits, the bike just wanted to throw me off, every time I touched the throttle the rear wanted to come around on me and I lost the front quite a few times, too many for my liking.

Everything we’re doing, trying to reduce the chatter is just making the bike difficult to ride. We’re going to have to rethink things again and come out fresh tomorrow. I’m not too worried about finding the pace, it was just a little bit disappointing this afternoon”.