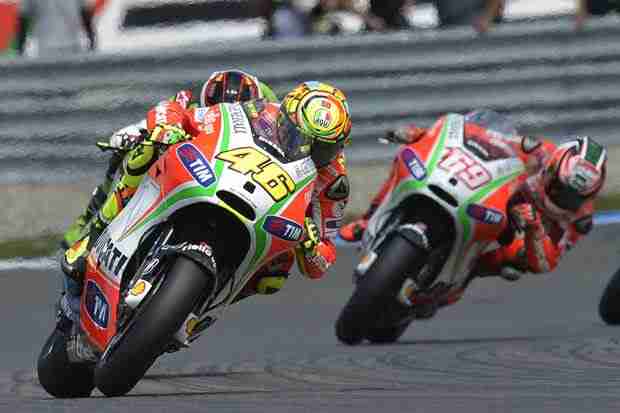 The Ducati Team experienced an up-and-down weekend at the Assen TT, in the practice sessions and in the race, which was marked by agreeable weather conditions. Nicky Hayden and Valentino Rossi both enjoyed decent starts despite unfavourable grid positions, but both had to overcome problems.

The American suffered a setback when he went off the track at the chicane on lap one, but he quickly re-joined the race and continued to fight in the same group, eventually posting a sixth-place result. His teammate was involved in the same battle, but the Italian was forced to pit with an unusual tyre problem that Bridgestone is investigating. Nonetheless, he demonstrated determination and desire as he returned to the track and fought to a thirteenth-place finish.

“I got a pretty good start and stayed out of the mess in turn one, but then I braked too deep in the chicane and went through the gravel. I almost lost the train, but I charged and was able to catch the group again. My bike felt pretty decent, and I got back in front of those guys. I was fighting with Crutchlow and Barbera. After Cal passed, Hector made a big mistake in the chicane and I almost hit him. Valentino and some of the others had tyre problems, but mine hung in there better than some. It would be nice not to have made that mistake on lap one, but I know if I want to go with that group, I’ve got to go at 100 per cent. A couple guys fell down, which helped me to get sixth place, but that’s racing. It hasn’t been an easy weekend, but the guys have really worked hard, and hopefully soon we can really do a good result.”

“It’s a shame about today because I started quite well. I was there, having a good race, and I think I could have had a decent result. I was fighting with Nicky, who had passed me, but he was a little bit slower and I was waiting for a good moment to attack him again. I could have finished sixth, which would have given me some points to help in the standings, but we had a big problem with the tyre about eleven laps from the end. I had to return to the garage to change it because it was impossible to continue, so I started again with the soft and finished the race. We’ll try again next week at the Sachsenring.”

“Nicky had a very determined race. He fought and maintained a good rhythm as long as he could, and he managed to recover when he had a small misstep, showing once again that he always gives his all. Valentino did the same. He got a very good start and was there in the same group, but a problem with the rear tyre forced him to pit. He didn’t want to stop, and after the tyre was changed, he returned to the track in order to bring home thirteenth place and three points.”