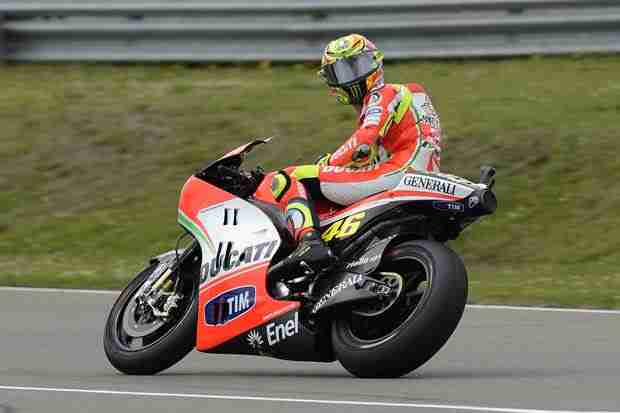 Following a good start to the Dutch TT weekend in yesterday’s free practice sessions, the Ducati Team experienced a relatively challenging qualifying session today. On a day marked by shifting weather conditions, with rain periodically interrupting the track time, Nicky Hayden and Valentino Rossi both slightly improved their lap times from yesterday, but not by as much as they would have liked. Tomorrow, Hayden and Rossi will start from the ninth and tenth spots on the grid, respectively.

“The weather was obviously very strange, but that’s something everybody has to deal with. During the first exit, I did a 34.9 with the hard tyre, and as I was fourth at the time, I thought maybe we could do something good today. Then the rain came and I lost the feeling a little bit. In the last exit, with a soft tyre, I managed to improve by a couple of tenths, but it clearly wasn’t enough. I’m not happy. I can’t say I left a lot out there, but even a tenth would have moved me up a couple of spots. With the group in front of me going fast and consistent, 26 laps around here definitely won’t be easy, but we’ll try to understand something and see what tomorrow brings.”

“Today obviously didn’t go as well as yesterday. Unfortunately, we tried to make a few adjustments in an effort to get the tyre to slide less, but as soon as we load the rear a bit, the bike becomes difficult to ride because I lose a lot of grip on the front. We tried it this morning and a little in the afternoon, but in the end we returned to yesterday’s settings. We were also a bit unlucky with the weather, as I had three soft tyres to use in qualifying, but because of the various rain breaks, I was only able to use one. With this setup, maybe I can be a bit more competitive in the first part of the race, but then we’ll have to see what pace we’re able to do when the tyres start sliding a lot.”