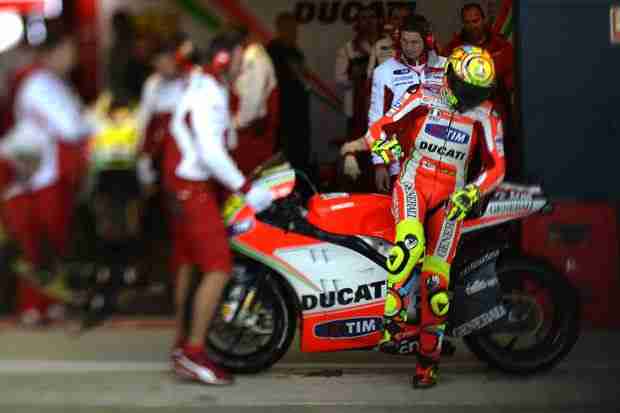 From the giant party that is World Ducati Week at Misano, to the Temple of Speed: Valentino Rossi, Nicky Hayden and the Ducati Team are preparing for a three-week, three-race tour de force, beginning on Saturday at Northern Holland’s TT Circuit Assen. The historic track that is home for the famous Dutch TT has been modified in recent years, though it’s still a fascinating circuit, and the event is capable of attracting huge numbers of motorcyclists and passionate fans of two-wheeled racing.

Valentino Rossi and Nicky Hayden count the track amongst their favourites, and it has played host to wins for both riders: one for the American and seven for the Italian.

“Assen is a great track. I like it a lot, and it brings to mind a bunch of nice memories. We’ll try to start off with a good feeling with the track in order to improve our results a bit. For the moment, we can only work on the setup to prepare the bike as we try to return to the level that we had attained prior to Silverstone, which was a very difficult race. We were a bit better at Barcelona and during the dry sessions at Le Mans, so we must at least regain that pace. If it should also happen to rain, we know that we can be more competitive.”

“Assen has changed a bit over the years, but it’s a track that I like. There are some nice, fast sections, like the last bit, coming back to the stadium. A couple of those corners with the banking are pretty fun. Assen is one of those places where you never know what the weather’s going to be like, so you just have to be prepared for anything on Saturday. If you look at the result of my last race, I can’t say that it was really positive, but we learned a couple of things. One of those is that we need to try to come up with something to be easier on the tyre, so we don’t destroy it as quickly. We’ll work on that in the Netherlands and try to get a good result.”

“The Dutch TT kicks off a very intense period for the team and the riders, because three races in three weeks, the final of which is at Mugello, means we’ll be very busy. Assen is a track that both Valentino and Nicky like, and where both have won and ride well. We must stay focused and work well in order to find a setup that enables them to have a good performance over race distance. We have gotten nearer to that goal at some tracks, whereas others have proven to be more challenging for us, so we have to be more consistent with our efforts, while working on the other aspects of the development.”