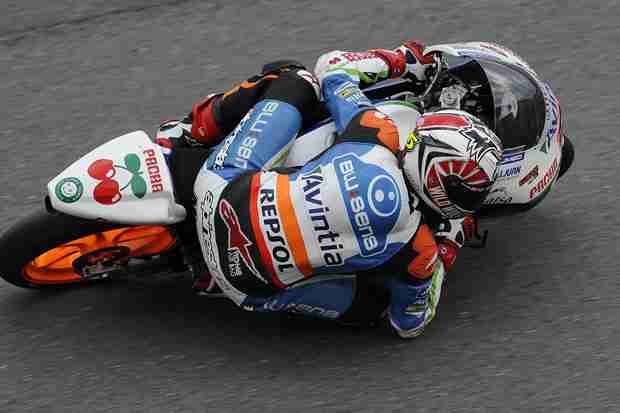 On the opening day of practice for the Moto3 German Grand Prix, Maverick ViÃ±ales showed that he was not going to back down. A big crash in the morning failed to stop him from recording the fastest time of the day in the second session, whilst fellow Repsol rider Ãlex Rins placed sixth on his Sachsenring debut and Miguel Oliveira took a solid eleventh.

The day began with a big moment for Maverick ViÃ±ales, who had undertaken less than a handful of laps when he suffered a spectacular crash on turn 11 –one of the fastest sections of the German track. He escaped uninjured, but gave his mechanics plenty of work to do. They did so at a speedy pace to allow ViÃ±ales the chance to go out again, and he recorded the sixth fastest time of the morning. Miguel Oliveira was fourth in the session, whilst Ãlex Rins quickly took to Sachsenring with the eleventh quickest lap.

In the afternoon, the World Championship leader upped his pace. With 2:30 to go in the second session, ViÃ±ales went fastest. He improved further upon his time to end the day with a best lap of 1’28.661. Rins was six tenths down in fifth, but sixth in the overall classification for the day. Oliveira was unable to lower his lap time in the afternoon, seventeenth in that session and eleventh overall –1.76s down on ViÃ±ales.

“We are happy, despite the crash, because we showed that we are fast in the afternoon. I like this circuit because it is very technical, so you have to work your hardest –especially when planning for the race with worn tyres. The crash this morning didn’t cause any damage –I just took a knock to my ribs that I don’t think is anything serious. I lowsided on the fast section, which is something that happens a lot to people and today happened to us. The tyre was cold, as it was only the fourth lap, but the important thing is that we were able to bounce back and return to riding fast.”

“The first session was much more positive for us than the second part of the day. We rode at a good pace in the morning and did a good job as a team, finishing fourth. The problem came in the afternoon, as I didn’t feel as comfortable –especially in the third sector of the circuit. We need to analyse the telemetry to see where we are going wrong and how we can improve this. We had some very consistent times over the course of the afternoon, but I hope that we can be further up the order tomorrow.”

“This was my first time riding at the Sachsenring. It is a track that I like and to which we have adapted quickly, right from the opening laps. I feel very comfortable, which allowed us to be just seven tenths off the top –even with plenty of things to improve tomorrow. The important thing is being able to find a good pace that allows us to be up at the front. We still need to get better in the first sector, as on the first corner we are losing some tenths that we should be catching up in order to be more competitive. We went out with the same setup as in Assen and made a few small changes to the rear.”