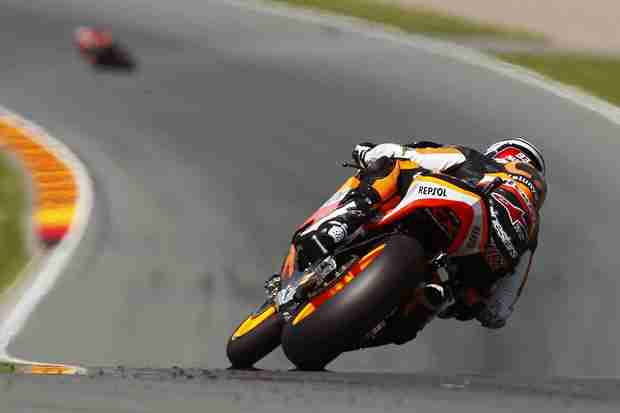 Friday was a day of contrasts at Sachsenring, where the first practice sessions for the German Grand Prix took place. The race is the eighth round of the season for the Moto2 class, led by Marc MÃ¡rquez. The Repsol rider was second overall at the end of the day, having ridden at a strong pace and also suffered a heavy morning crash at over 200km/h. With little more than grazes to his right forearm and some bumps and bruises, the Spaniard was able to return for the rainy second session –in which he was eighth quickest.

The winner of the Dutch TT six days ago, MÃ¡rquez took the early iniciative in Germany. The Repsol rider continually lowered his lap times on a dry track in the morning, until, four minutes from the end of the session, he was thrown from his bike. The Spaniard fell at turn 11 when in fifth gear, at a speed of some 215km/h, having made a small but costly mistake. He and his bike parted ways in a long slide across the asphalt, but the rider escaped relatively unscathed. MÃ¡rquez ended the session in second, 0.480 down on Pol EspargarÃ³.

Things were more difficult in the afternoon, as rain threw the riders’ workloads into disarray. The session began on a wet track, with the riders using wet weather tyres for the task. The track slowly dried out, but just minutes after the rubber had been changed to slicks, another downpour befell the Moto2 field. MÃ¡rquez rode just 11 laps, placing eighth in a session which featured just 16 riders going round in under 107% of the time set by fastest man, Pol EspargarÃ³.

“I felt good on the bike and the important thing is that we have a good foundation to build upon tomorrow. It is a shame that I crashed at the end of the first session. It is a corner in which you are riding in fifth and pushing the front hard, and I made a mistake. The front locked up when I hit the bumps on the exit, and going so fast it was impossible to save the crash. I slid for a long way, but luckily I am ok. We weren’t able to draw too many conclusions from the afternoon due to the weather conditions. Let’s hope that the weather is better tomorrow and that we can continue to fine tune our setup.”