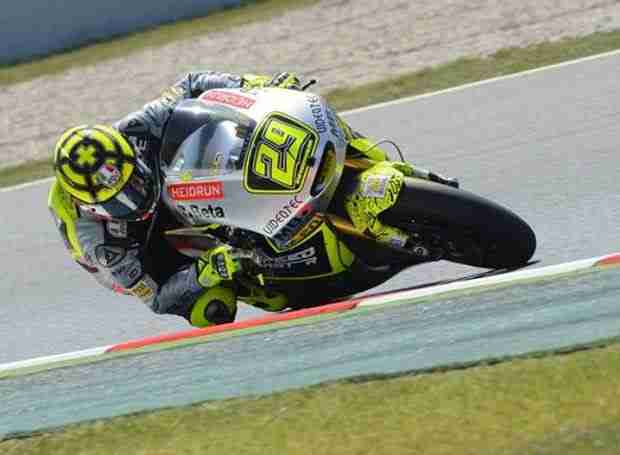 While the Spanish fans were divided on whether Marc Marquez and Pol Espargaro would win the race, it was Andrea Iannone who took his first victory of the season in a hard fought race long battle with Marquez and Thomas Luthi.

‘Crazy Joe’ demonstrated all his braking skills as he kept in check all the highspeed and tow overtakes that Marquez tried to pull on him on the long straight – which resembled the Qatar race – but in the third to last lap it was an error and a great save by Monlau Competition rider that allowed Thomas Luthi to take the second spot on the podium and just 0.083s adrift and Marquez in third, while leaving Pol Espargaro lying in the gravel trap at the Caixa turn and a suspected ankle injury and no points.

Marquez almost lost control in a lowside and saved himself and his Suter with his knee and elbow, but when he returned to the racing line he found a hard charging Espargaro who dived in on the inside and making Marquez close his line making the two come in contact which sent Espargaro into a highside. The Spaniard apologized and said he didn’t know that Espargaro was there and hoped he was okay, he later a got a one minute penalty.

With Espargaro out of the running his team mate Tito Rabat inherited the fourth postion ahead of Simone Corsi and Takaaki Nakagami. Dominque Aegerter had an excellent start and was riding as high as second until he started fading and ended up seventh after Toni Elias crashed out with just seven laps to go. Randy Krummenacher was 8th followed by Marc VDS Racing team duo Mika Kallio and Scott Redding who also faded to end up 10th.