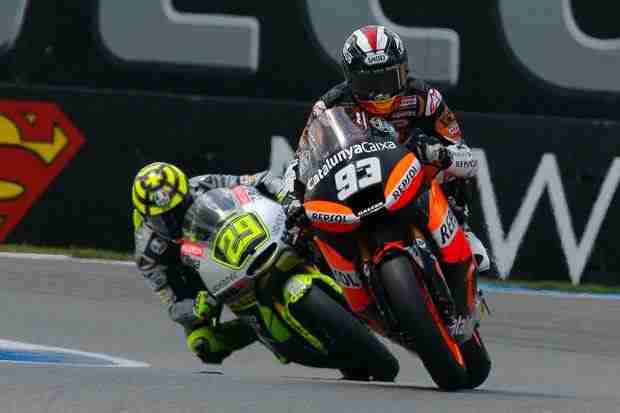 Marc MÃ¡rquez had a big day at the Dutch TT, taking victory in a race in which closest rivals in the standings, Pol EspargarÃ³ and Thomas Luthi, fell in the early stages. The Repsol rider rode a studious race that evolved into a thrilling comeback, culminating in two great late overtaking moves that earned him his third win of the season. The Spaniard now holds a 23-point lead over the second placed rider in the overall standings, Andrea Iannone.

Starting from pole position, MÃ¡rquez made a good start and was immersed in the fight for fourth place, whilst still backing off on the perilous slow corners of Assen. Thomas Luthi was his first rival to fall in a crash with another rider, whilst Pol EspargarÃ³ was the next to go when he crashed out of the lead. That paved the way for the Repsol rider, who was part of the front group and was bringing his tyres up to temperature.

After some initial nervy laps as part of the group, MÃ¡rquez went up to third on lap seven as he battled with Scott Redding, whilst Andrea Iannone began to pull away in the lead. Eleven laps in, the Repsol rider got through and began his pursuit of the Italian. With strong pace on his side, MÃ¡rquez caught up with three laps to go and attempted a move on the outside of the straight. He went past, but Iannone responded a few corners later. MÃ¡rquez had a final trick up his sleeve, and went back through on the inside and held on to cross the line first. It was his third win of the campaign.

With this result, MÃ¡rquez’ total in the Moto2 World Championship rises to 127 points –23 more than Andrea Iannone, and 31 more than third placed Pol EspargarÃ³.

“It was a difficult race, but a nice one. I had some problems at the start, because some issues that weren’t there in practice came up and I was unable to find the right pace. That was perhaps my strength ahead of today. When I saw Iannone getting away I tried to keep calm, because I knew that tyres would be crucial at the end of the race.

Maybe I wasted a little too much time trying to get past Aegerter and Redding; they were giving their all, but I was able to get past. There were some beautiful final laps in the battle with Iannone, and I would have liked to have had Pol EspargarÃ³ there with us in what would have been a very tight fight. In any case, I am happy with how things went and with our work. Now we move on to Germany, which will be an important race.”