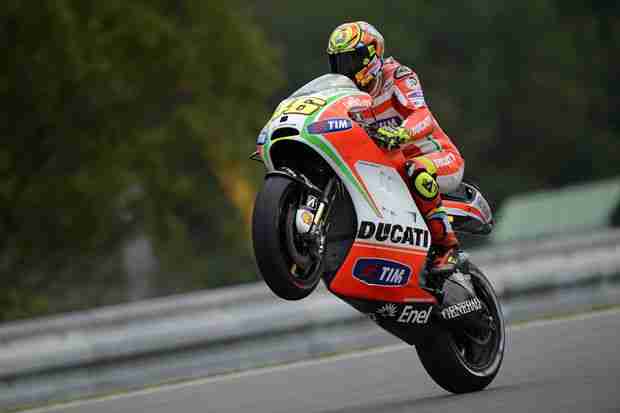 The Ducati Team is preparing for its second home race of the season, which will take place on Sunday at the Misano World Circuit Marco Simoncelli. The GP di San Marino e della Riviera Rimini is also an important round for Valentino Rossi, who lives near the circuit at which he has posted two wins and an additional podium finish.

Nicky Hayden will return to the track after incurring an injury at Indianapolis that also forced him to miss the following Grand Prix, at Brno. The American has been undergoing rehabilitation in the United States, and Friday he’ll test the strength and endurance of his right hand, which had suffered two fractures. As usual at Misano, the Ducati Team will be supported by Ducati fans in the “Variante del Parco” grandstand, which is situated near the first corner.

“Misano is one of two home races for us, so there will be a lot of fans and a very special atmosphere, as is always the case when we race in Italy. The track is challenging and difficult, but I like it a lot. It has some really fun sections, such as the exit from the “Tramonto” corner and the big, fast corners after the back straight. We’ll have to work well in the practice sessions in order to fight and to try and do a nice race.”

“I can’t wait to get back on the track, but I know that it won’t be easy this weekend. My hand is improving and one of the two fractures is healing quickly, while the other metacarpal still has a pretty good fracture line. I’ve been able to keep up with my cardio training, and of course I’ve been doing the normal rehab, including a visit to Dr Ting in California. Braking on these MotoGP bikes puts a lot of stress on the right hand, particularly on a clockwise circuit like Misano. Nevertheless, racing at one of Ducati’s home tracks is something that I enjoy, and I certainly hope to be able to do the race. We’ve got a couple of things stacked against us, but we’ll see if we can put up a solid result and kick off a new positive stretch at Misano.”

“At Misano we’ll be back with both of our riders, which is definitely a positive for our home race, where we’ll have a lot of fans. Over the past few weeks, Nicky has undergone rehabilitation while keeping up with his training, and on Friday morning we’ll see how his hand reacts to the stress of riding the bike, especially on braking. It’s Valentino’s home race, and Misano is definitely a special round for him. We’ll work on the setup to try and give him the conditions he needs to ride at a good, consistent pace for the entire race.”