Valentino Rossi and Max Biaggi were once arch enemies, the fair haired kid with his mischevious antics that changed the face of racing against the glowering, sullen and villanous Black Corsair who took their hate of each from on track to off track and used the media to find followers and divide Italy into two fueding factions, like the Hatfields and McCoys, but more appropriately since they are Italians, the Capulets and the Montagues, the Guelphs and Ghibellines and so on. The two were separated by a chain of events that saw Biaggi being ousted from the GP paddock and become a World Superbike hero, while his nemesis later changed steed and began struggling with a red beast.

Biaggi previewing this weekend’s Imola round in an interview with the Gazzetta dello Sport couldn’t resist talking about his old rival. “At the beginning of my career everything was going smoothly and then Valentino Rossi arrived and I became the bad guy. Our rivalry was taken outside the motorcycle racing world and away from passionate racing fans, but it was a mask, people who know me well know that I’m a different person.”

Biaggi doesn’t believe that there will ever be a reconciliation between them and to prove it took a dig at Rossi: “We’ve never tried to clear up what happened. I was the devil, he was the smiling angel, now that things aren’t going so well he doesn’t joke around like before. And you get these thoughts: like he’s a flower that is losing his petals, while I’ve blossomed again.

Asked about the fact that many are arguing that his Aprilia is a MotoGP bike in disguise, Biaggi said, “In Australia I was pushed off at the first corner and I didn’t gain anything on Checa who was leading, Ducati is the reference, before accusing anyone they’d better look in their own home.” Biaggi is ready to take on Checa, “In 2010 I won, last season Checa won : We’ll see who’s better.”

While the Roman Emperor will be turning 41 this year and he doesn’t categorically exclude a return to MotoGP. “I’m in Superbikes, this summer I’ll think about the future. If they try hard enough, I’ll think about it. Negotiations with Aprilia haven’t started yet: we haven’t spoken, because off track I’m not that fast.” 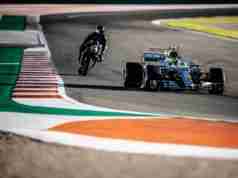 Marc Marquez rides to victory at the French GP