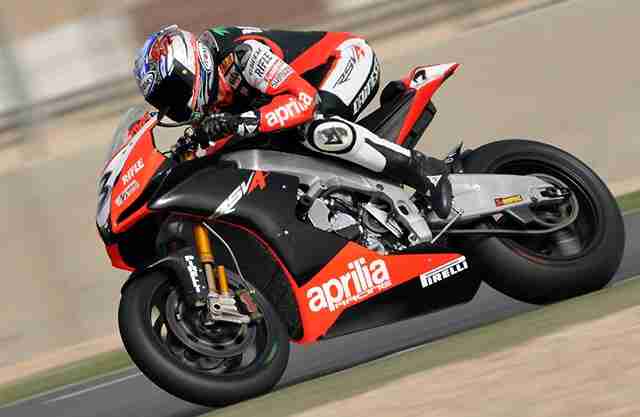 A few days from the long awaited Italian round at Imola, Max Biaggi and Eugene Laverty are ready for battle. Present as “guest stars” at the Piaggio Group Americas Dealer Convention which drew the Piaggio Group dealers from the USA and Canada as well as the distributors from Latin America, the Aprilia Racing Team standard bearers in World Superbike were able to draw their conclusions after the first round of the season. Max Biaggi’s victory and second place at Phillip Island, at the dÃ©but of a completely revamped team, confirmed the excellent condition of the five time World Champion and his extraordinary Aprilia RSV4.

“The season started in the best possible way — stated Max — We won Race 1 putting pressure on Carlos Checa and Ducati, pushing him into a mistake, while the comeback from last to second place in Race 2 was without a doubt one of the best performances of my career. That had never happened to me before. After the contact with Sykes in the first turn I didn’t think I’d be able to make it, but seeing the good times lap after lap, I gained confidence and pushed to the limit until the chequered flag came out. These are two results that paid us back for all the work we had done during the weekend and which give us high hopes, because when you start the season winning the atmosphere is positive”.

The feeling with the new team, headed up by Aligi Deganello, also seemed excellent: “If it’s true that ‘well begun is half done’, we are definitely off on the right foot. We established a good rapport right away with my new crew chief, Aligi Deganello, and with the mechanics, in spite of the little time we had to bring the new team together. It was important to understand right from the start what I needed and how the team would have to work to help me obtain it. The results of the first round give us confidence for the rest of the season”.

For team mate Eugene Laverty, the Australian round was a difficult weekend: “It wasn’t the most simple start. Last year in my rookie season I had some satisfying races with some podiums and the two wins at Monza, but if I want to fight for the title I’ll need to be consistent straight away, getting up on the podium and winning even more races”.

Eugene’s thoughts are already on the next race: “Our rivals are tough, starting with my garage mate, Max Biaggi and 2011 champion Carlos Checa. Since I’ve gotten to Team Aprilia I’ve known that I have the bike and all the right moves to be able to aim for victory in the Championship. In Australia I wasn’t able to express my full potential, partly due to an injury I suffered during the tests which effected all our work. For me the season will start from the next race at Imola”.

Max and Eugene, coming back from Miami, were engaged in two days of testing at the Aragon circuit, where they tested some new solutions for the coming races. Many laps for the Aprilia Racing Team colour bearers, with a final best lap time of 1’58.8 for Max Biaggi and 1’59.5 for Laverty.