Maverick ViÃ±ales and Repsol are joining forces in 2012. The 17-year-old from Roses in Spain has become the latest addition to the select group of riders sponsored by Repsol in the motorcycle World Championship. With the signing of the breakthrough rider of last season, Repsol have strengthened yet further their dream lineup. Casey Stoner, Dani Pedrosa (MotoGP), Marc MÃ¡rquez (Moto2), Maverick ViÃ±ales, Miguel Oliveira and Ãlex Rins (Moto3) are the six stars present for the company in all three Grand Prix classes.
The agreement between Avintia CompeticiÃ³n and Repsol –which provides ViÃ±ales with the energy company support– runs until the end of the year.

Despite his tender years, ViÃ±ales has already shown his talent on both a national and international level. He began his career in the Campeonato de EspaÃ±a de Velocidad (CEV) Spanish Championship, finishing second in his debut season and missing out on the title by just four points. He went one better in 2010, claiming the 125cc title and also becoming European Champion.

One year later, ViÃ±ales shone on the world stage. He placed third overall in the final year of the 125cc World Championship and claimed nine podiums –four of which were race wins. He was the logical choice for his colleagues in voting for the Rookie Of The Year award.
Maverick ViÃ±ales will be part of a new category in 2012, as Moto3 takes over as the initial class for young riders. He joins fellow Repsol riders Miguel Oliveira and Ãlex Rins in a star-studded team. He is currently preparing for the upcoming season and will in fact be testing from today until Friday at the Ricardo Tormo circuit in Valencia.
Repsol have been present at the highest level of competition for over 40 years and are one of the main sponsors in the MotoGP World Championship. The company begins 2012 with aspirations of victory in every class.

“I am very excited to be riding for a sponsor like Repsol this season, as Repsol have been a force behind a great number of victories in the World Championship. Many great riders have received their support and I am honoured to be joining this elite group.

The big three current Repsol riders –Casey Stoner, Dani Pedrosa and Marc MÃ¡rquez– have won titles, and this is my aim for 2012. I can only hope to follow the path that other Repsol riders have established in the World Championship and take many wins this year. Now it is time for me to test in Valencia and we will be trying out many of the improvements that have been made over the winter”. 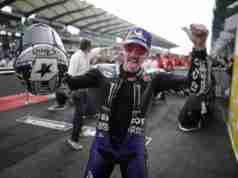 Maverick Viñales escapes to an easy win at Sepang MotoGP

Marquez, Rins and Vinales on podium at Assen MotoGP thriller