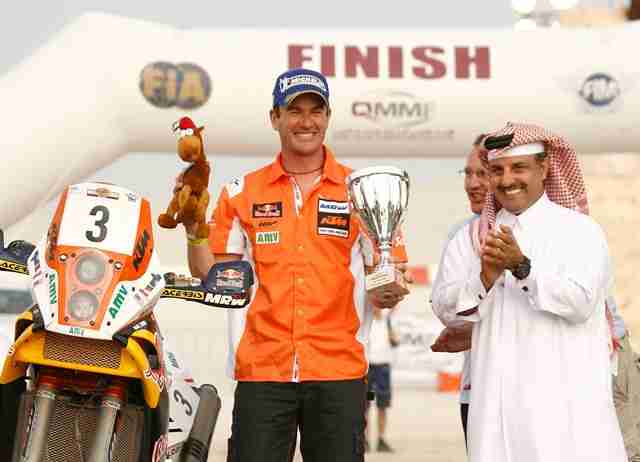 Marc Coma continued his strong start to the Cross-Country Rallies World Championship with a win in Qatar at the Sealine Cross-Country Rally. In his first appearance at the Arab Emirate, the Repsol rider performed excellently over the four days. He led the way from the opening stage, managing his advantage until taking the victory.

Winner of the Abu Dhabi Desert Challenge fifteen days ago to open 2012 in fine style, Marc Coma was also the quickest on Wednesday in the first stage of the Qatar event. He was six seconds faster than Joan Barreda, who received a penalty of two hours for missing a checkpoint that would rule him out of the battle for the win. HÃ©lder Rodrigues was thus second, more than three minutes behind Coma. On stage two, the Repsol rider held onto his advantage and in the third he managed to again extend the gap —taking his lead up to almost six minutes overall. With the 209km timed final stage over this morning, Marc Coma rounded off the Sealine Cross-Country Rally with a new victory to add to his honours and continues to lead the title fight. The next event for the Repsol rider is the Sardinia Rally from June 23rd-28th.

“The final stage was 209km, taking in the final part of yesterday’s special stage so it wasn’t overly difficult. We went out intending to manage the small gap that we had after yesterday, because in a short rally of just four days in duration, getting the correct strategy together and not making mistakes was important. With no previous experience here in either the country or the desert, this was going to be a difficult race for us, but in the end it went well and I am happy to have won here for the first time.

I was very surprised, because it was a very complete race on completely unknown terrain packed with dunes, fast zones, technical zones, rocks and navigated sections. I think that this rally certainly has a future on the World Championship calendar. We’ve won two races from two, so we are looking good in the overall championship standings”.