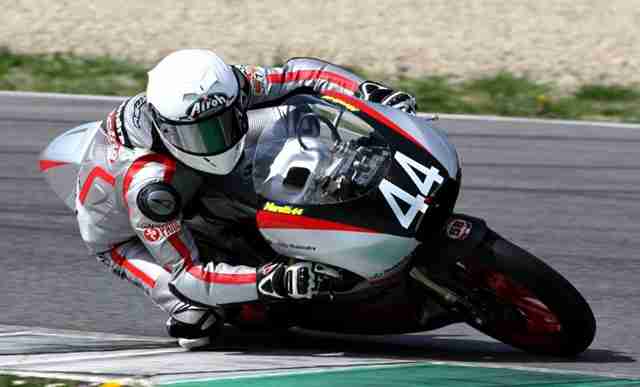 Mahindra Racing’s Riccardo Moretti and Sarath Kumar finished first and seventh in the second race of the Italian Championships 125cc category. After heavy rain, the track was still wet for the race Sunday. Moretti got a good start and had to fight immediately with other riders to take the lead. At the end of lap 10, Moretti got the chequered flag while his team-mate Kumar ended securing his first points of the Championships.

“It has been a really tough race. My bike improved a lot compared to yesterday’s qualifying, but we were not still 100 percent with the set-up. My technicians were still impressive to allow me to win the second race in a row,” said Moretti.

Mahindra Racing’s second rider Sarath Kumar created history by becoming the first Indian ever to win points at an international motorsport event after he finished in seventh spot. Kumar’s feat becomes that much more special considering he started from 20th position on the grid after crashing during the qualifying session.

“It is a great feel of pride and satisfaction for having scored my first points in an international championship. I am thankful to all the encouragement and support given to me by my team, my manager and the Mahindra Group,” he said.

Anand Mahindra, Vice Chairman & MD, Mahindra & Mahindra said,” We are ecstatic about our second consecutive win in the Italian Championship today. Riccardo Moretti has shown tremendous skill and expertise in negotiating the circuit under damp conditions. We are particularly proud of our fellow Indian Sarath Kumar for scoring his first ever International points.”

Moretti maintains the lead in the standings with 50 points while Kumar is ninth, thanks to the nine points earned here. The next race will take place April 29 at Monza.