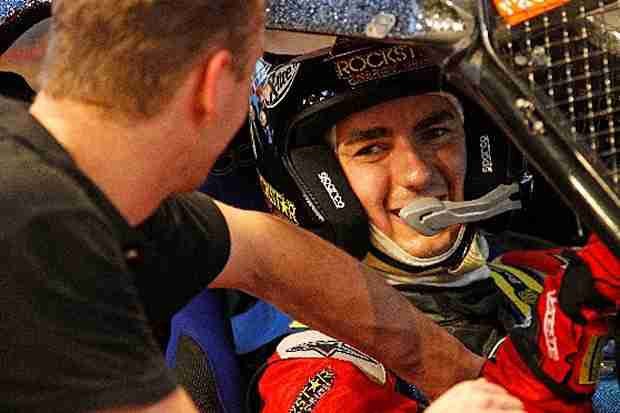 2012 MotoGP World Champion Jorge Lorenzo took some time out this week in the winter break to enjoy the legendary Thailand hospitality with a bit of racing excitement added. The Yamaha Factory rider took part in his first Race of Champions event in Bangkok over the weekend, pitting himself against the world’s best car racing drivers, including Formula One legends Sebastian Vettel and Michael Schumacher. Run over two days with a number of different cars on a short twisty stadium circuit, the annual competition is by invitation only to past and present world title-holders from different Championships.

Lorenzo, one of only two motorcycle competitors, made it to the semi-finals on day one as part of Team All Stars with Swiss Le Mans 24HR veteran Tom Cristensen. Day two saw the individual challenges, the two-wheeled Champion eventually dropping out after a heated race against 2012 Formula One Champion Vettel.

When not on track Lorenzo was out on the roads of Bangkok leading a procession of Thai Yamaha riders through the streets as a guest of Yamaha Thailand. Commuters where more than a little surprised as the Spanish rider pulled up next to them at the traffic lights on his Yamaha YZF-R1. He was also the guest of honour at a special Yamaha Thailand event, cracking open the champagne with not just Yamaha Thailand’s top management team but also Takaaki Kimura, Senior Managing Executive Officer of Yamaha Motor Co. Ltd.

“It’s been a fantastic experience to be here in Thailand again. The people are so friendly and warm; it is always a pleasure to be here. I have really enjoyed the Race of Champions; the drivers are so talented and it’s a real challenge to try to keep up with them. I would like to come back next time and maybe bring some motorbikes for them to try! I want to thank all my friends at Yamaha Thailand for making me feel so welcomed, I hope to come back and see them again next year.”