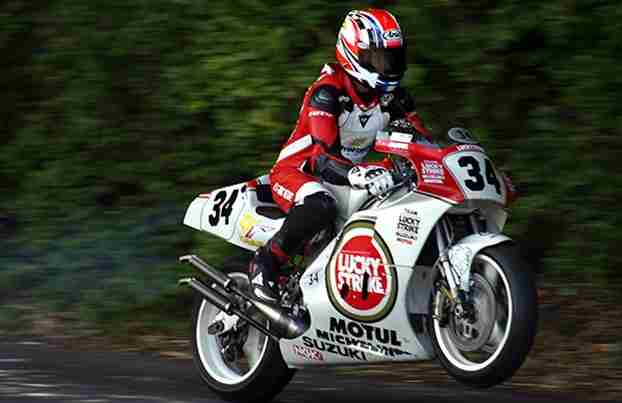 Former 1993 World Champion Kevin Schwantz and racing’s most famous runner-up, Randy Mamola will be Arai’s guests this year at the Isle of Man TT Races to take part in the parade lap on Wednesday June 6th. Schwantz will be riding a Suzuki GSXR-1000, while fellow American Mamola will taking Ducati’s newest Superbike, the Ducati 1199 Panigale around the 37.73-mile circuit.

“The Isle of Man is rightly considered a mecca for Motorcycle Racing and when I was offered the opportunity to experience a closed road parade lap I jumped at the chance. The top TT racers are respected around the world and I’m really looking forward to experiencing the famous Mountain Course first hand,” said Schwantz. Mamola, who will be making the trip for the first time said, “I have a long connection with Arai and it will be a real honour to represent them in a parade lap around this iconic race circuit. I’ve met many TT racers over the course of my career and I’m pleased to get the chance to see the races live.”

Joining the two Americans will be eleven-times TT winner Phillip McCallen who’ll be on a Honda RC45 and former British and World Superbike Champion Neil Hodgson who will also be on a Ducati Panigale and Swan Yamaha’s and multi-TT winner Ian Hutchinson who is still recovering from his latest leg injury, but is still able to ride as he demonstrated during the TT press launch. To represent the current crop MotoGP riders (after Valentino Rossi, Nicky Hayden, Jorge Lorenzo, and now retired Loris Capirossi) and back for the second straight year, will be Yamaha’s Tech3 rider Cal Crutchlow, who last year rode alongside five-time world champion Mick Doohan.