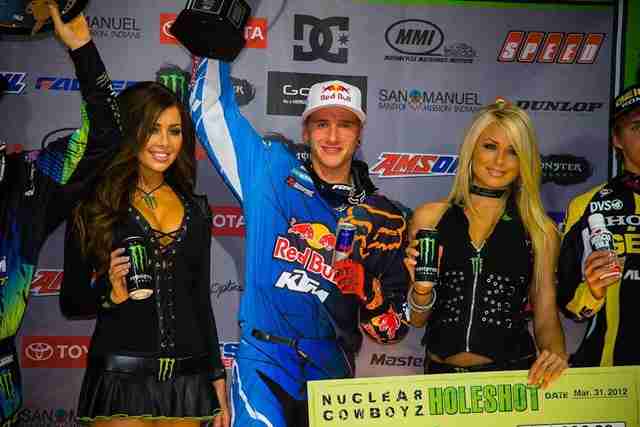 Red Bull/KTM’s Ken Roczen took his first win of the season at the seventh round of the AMA East Supercross Lites Series in Houston Texas by capitalizing on a last lap crash by championship leader Justin Barcia. It was the German teenager’s second career victory in the Supercross Lites class. Roczen, who is still recovering from the flu that plagued him last week, took it easy in practice as well as in his heat. He rode a solid pace in the first heat race to easily qualify into the main event with a third place result.

He then pulled a great start in the main event to be second behind Barcia at the first corner. Roczen made a nice pass on Barcia for the lead on the first lap and held it into the next before his rival was able to reclaim the top spot. Near the halfway mark in the race, Roczen then came under heavy pressure from Blake Baggett and this forced him to push harder in order to pull away. He eventually put three seconds on Baggett to settle into second spot place. On the final lap with just a few corners to go, Barcia crashed and Roczen moved into the lead. The KTM factory rider went on to take the win while Barcia recovered and finished second.

“This isn’t the way I wanted to earn my first win, but I’ll take it,” remarked Roczen on the podium. “Sometimes in racing it’s just having good luck and tonight luck was on my side. I am really excited to take this motivation into my training over the next two weeks and come back even stronger at New Orleans.”

Roczen’s win tonight helps him move up one position in the championship point standings. He now sits in third place as riders head into the first break of the season. KTM teammate Ryan Dungey continues to heal a broken collarbone but despite having missed a number of races still sits second in the Supercross overall standings behind Ryan Villopoto.