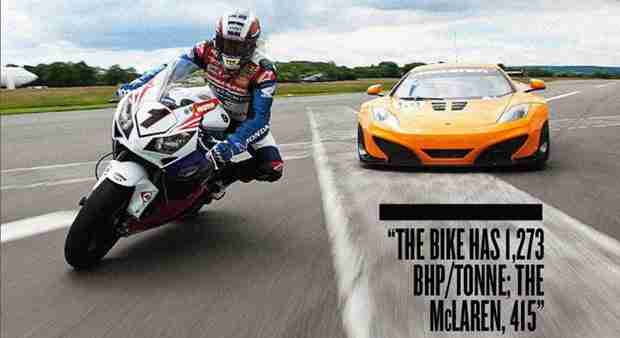 Its not the first time that TT champion John McGuinness has been featured on Top Gear, last year Top Gear got him to drive a Ferrari 458 and a McLaren MP4-12C on the TT track. This year they have him where he belongs back on the his TT winning bike, but in a twist he takes on the Stig in a MP4-12C GT. The ultimate race?

John McGuinness’s Honda Fireblade churns out a massive 210bhp and weighs just 165 kilograms giving it a power to weight ratio of 1.27:1 and a top speed of 320km/h. Stig on the other hand will be in McLaren’s new flagship ride the MP4-12C, of-course not the stock one but a GT version that will be participating in the upcoming FIA GT1 championship. This race pepped McLaren weighs 1,235 kilograms and its ‘small’ 3.8L twin turbo V8 produces a mighty 513bhp. Interestingly, though the McLaren had the disadvantage in terms of the power to weight ratio this race ended with the car on top and the Stig coming in faster by almost 4.2 seconds. Stig is the ultimate then? Not exactly, while McGuinness had to deal with uneven surfaces and slippery tarmac, the Stig in the race pepped McLaren had it easy with multiple levels of traction control, the massive down force provided by the car’s design and of-course the four massive tyres holding it in place.