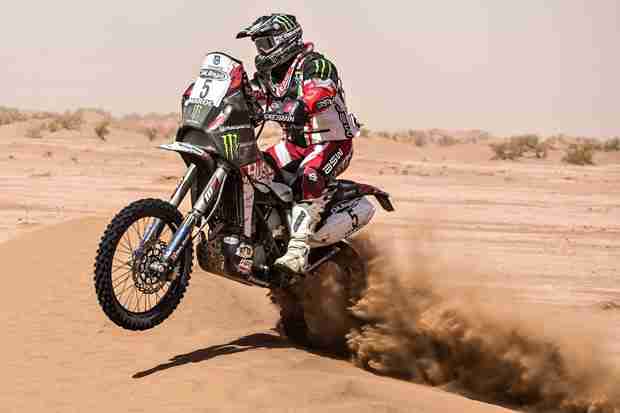 Husqvarna Rally Team by Speedbrain notched up another victory today in the fifth and penultimate stage of the Morocco Rally. This time it was Spaniard Joan Barreda on the Husqvarna TE449RR by Speedbrain taking the honours after the success of team-mate Paulo Goncalves on day three. Barreda came in over a minute ahead of Rodrigues and cut leader Cyril Despres’ overall advantage down by 12’30”. Barreda holds on to second overall place but is now just 5’33” behind the leader. Goncalves did well too with a fourth place and Fish finished nine. Tomorrow sees the final stage Zagora-ZagorÃ  with 177 km (110 miles) of special test.

“I’m very pleased with the win. Just what was needed! Today I started from tenth place and I managed to make up a lot of ground on Despres in spite of there still being such a lot of navigation and dust. I kept my concentration and the bike always responded to me. This really is an important race for my team ahead of the Dakar and we’re really satisfied with the way things have been going. Tomorrow is the final day and I’ll give it 100% as always.”

“There was a lot of sand today too, but above all so much dust. I started from 22nd position and had to eat a lot of dirt and it wasn’t easy to finish this stage in fourth place. I’m satisfied with the race and the way that the team is working. ”

“I had a lot of fun today. I got the job done well, that consisted of assisting Barreda in case he needed it. We rode together for practically the whole stage and didn’t take too many risks.”

”Another great day for the team; Barreda has shown once again that he’s quick and competitive taking twelve minutes off Despres. Paulo also managed to gain ground in the overall standings moving up to sixth place, and Fish is doing a great job in the role of “water carrier”, earning valuable experience for the next Dakar.”