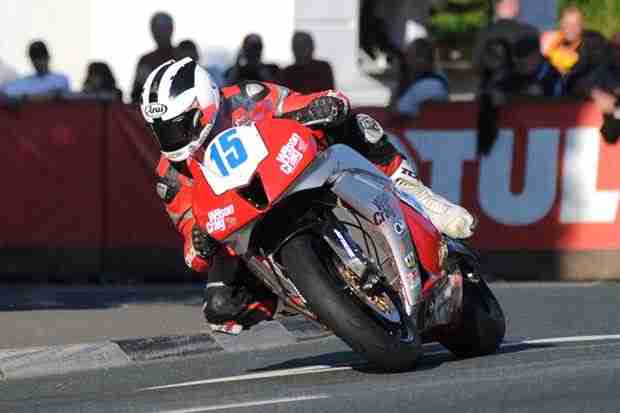 Course conditions were described as good all round although caution would again have to be exercised on the run towards Ballacraine, particularly through Greeba, Appledene and Gorse Lea where the low, setting sun was its worst. Lack of adhesion flags were also on display at Governor’s Bridge due to damp patches in the dip. Like Thursday, the sidecars were again first away at 6.25pm and with Dave Molyneux/Patrick Farrance setting off eighth, Tim Reeves/Dan Sayle set off first swiftly followed by John Holden/Andy Winkle, Conrad Harrison/Mike Aylott, Ben and Tom Birchall and Gary Bryan/Jamie Winn. However, Holden’s poor week continued as he only got as far as Quarter Bridge while Reeves didn’t fare much better, retiring at the Wagon and Horses. The Wright family were out of luck as well; Eddy stopping at Ballig Farm and son Dougie at Parliament Square.

Harrison was the first to complete a lap at 109.622mph although Bryan posted the fastest on the night at 110.311mph. Birchall did 108.896mph with Molyneux on 109.799mph and all of these pulled straight in, happy with their lap and, no doubt, having used the session to bed in tyres, chains and the like. Rob Handcock/Ken Edwards, whose engine expired at Sulby earlier in the week, did continue and were fastest on the second lap at 106.742mph. They were the only crew to squeeze in three laps with their final one being the fastest at 106.934mph.

The session came to an end at 7.10pm and five minutes later, the Supersport/Lightweight session, brought to a premature end the night before, got underway with Guy Martin the first to leave the line. James Hillier, Ian Mackman, Gary Johnson and Ian Hutchinson were all Supersport mounted with Michael Rutter taking out the KMR Kawasaki Supertwin. Cameron Donald was the first to complete the lap with a speed of 123.862mph and he had Dan Kneen and Martin for company, the duo lapping slightly slower at 123.081mph and 122.056mph respectively. However, it was once again William Dunlop who was quickest with a lap of 124.895mph whilst brother Michael was second at 124.175mph. The three Dans — Stewart, Cooper and Hegarty — were also impressive, all three lapping at more than 119mph.

They all continued on their second lap as Hillier set the fastest lap of the Lightweights at 114.872mph. Ryan Farquhar was second quickest at 114.174mph but reported oil flags at Barregarrow had slowed him down and teammate Rutter was third on the timesheets at 112.796mph. Ten riders in total broke the 110mph barrier with newcomer Jamie Hamilton setting the sixth fastest time on 111.417mph. Fellow newcomer Jimmy Storrar was also out in the session on his Superstock machine and lapped at 119.122mph, just edging out Karl Harris as the fastest newcomer for the week.

The majority of riders continued for a second lap but Donald, Kneen and Martin were also slower no doubt as a result of the oil while Michael Dunlop was out at Ballacraine. Gary Johnson experienced clutch problems and pulled off the course at Ramsey, taking the scenic route through Laxey back to the paddock. However, with oil on the course at both Barregarrow and Ballaugh, the session was brought to a premature end and the oil also resulted in the cancellation of the Superbike session, which was due to start later. So, John McGuinness will head into Saturday’s Superbike race as the fastest rider of the week but with the latter half of the week blighted by various issues, we’re yet to really see who’s on form and who isn’t.