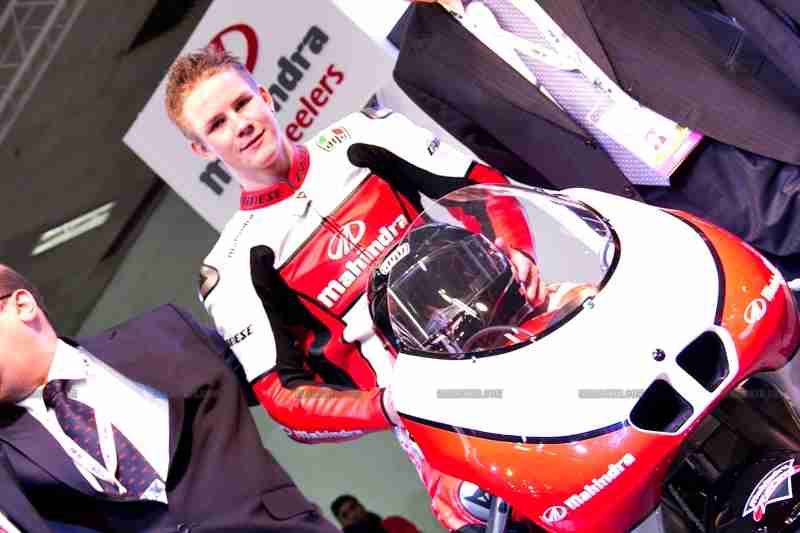 A veteran of the 125cc class, Danny Webb makes the change to Moto3 category with his Mahindra Racing Team, after the Indian outfit made their World Championship debut last year. We spoke to the soon to be 21 year old to find out his expectations for the season against the mighty KTM and Hondas.

How are you feeling after the two tests?

“I feel good. We’ve got a few things to sort out but the team went out testing on Monday with Riccardo [Moretti —Mahindra test rider] where they said they’ve improved the bike.Hopefully they’ve improved the last little bits that we need and we should be there, because we´re not too far off.We´re still in the early stages of developing the bike whereas KTM and Honda have been developing their bikes for quite a while, so I think it´s going good for us. I’ve got used to the bike, the 4-stroke, pretty quickly so I think if we can improve these last few bits we should be there.”

Which areas you need to improve on?

“We need to improve the acceleration a bit and we need to work on our engine braking. We just need to do a few bits and when we get them sorted we should be good.”

How is riding the 4-stroke?

“It’s really good fun. At the moment we´re sliding about a bit going into the corners and it’s all good fun doing that, but that’s not bringing us the lap times. I think that’s where KTM and Honda are getting the time on us, so when we sort that out we can be there.”

In what areas do you think the Mahindra is still behind on the KTM and Honda packages?

“I think more on the entry and exit of the corner. In the middle of fast corners we’re OK and we can run behind ViÃ±ales and those kinds of guys up front. It’s just in slower corners where you have to brake heavily and shift down through the gears and just the initial grunt to come out of the corner.”

How confident are you of addressing these issues early enough in the season?

“I’m confident. The team are working hard and the atmosphere is a lot different compared to last year. I’m as fit as I´ve been in all my career, so I’m ready and I think the team are ready for this challenge.”

What has made the atmosphere change this year?

“All the team want to improve and all seem very interested in what the bike is doing. It’s not even just the chassis side, they’re interested in what the engine is doing as well. I don’t know why the atmosphere has changed, I suppose it’s like having a new life; we can start again with Moto3 and all get our heads down. With this fresh start, if we work hard then there’s no reason why we can’t be at the front.”

What are your expectations for this year?

“My expectation is to be in the top 10 at the beginning and then push through to the top five. My confidence with the bike is really, really high and when we get these things sorted out, I’m sure we can ride up front. I don’t want to get too confident and then have things go wrong, I just want to take things step by step.”

How much have you had to change your riding style for the Moto3 bike?

“Quite a bit! But I’ve found it quite easy to change my riding style as I think the 4-stroke engine suits my style more than the 2-stroke. When it’s sliding about going into corners, I suppose I like being more aggressive with the bike and with this bike you can be more aggressive.”

How involved are you and team-mate Marcel SchrÃ¶tter in bike development at the moment?

“Marcel and I work closely together, so we put our feedback together and explain to the team what we’re feeling and then of course the team can see it on the data, so they know what we’re talking about. I think it’s good that Marcel and I work so close together because Mahindra have both riders saying the same thing.”

Are you and Marcel similar riders? Do you give similar feedback?

“Yes we do, apart from chassis-wise, where he goes a different way from me because he rides a bit differently. Apart from that we´re pretty similar and we seem to be having the same sort of feeling with the engine. We´re good friends as well and I think that´s what works because we don´t mind sharing data and helping each other out.”

Who do you see as the favourites this year and who are your rivals?

“I think ViÃ±ales is going to be good, and Cortese too. Most of the factory KTM boys are going to be up there because they’ve got a very good bike underneath them. I think Marcel and I can run up with them. We both know that we’re have about the same level and speed, so Marcel is probably one of my main rivals. He´s my team-mate and I know he’s a good rider so I’ll be out there to beat him.”