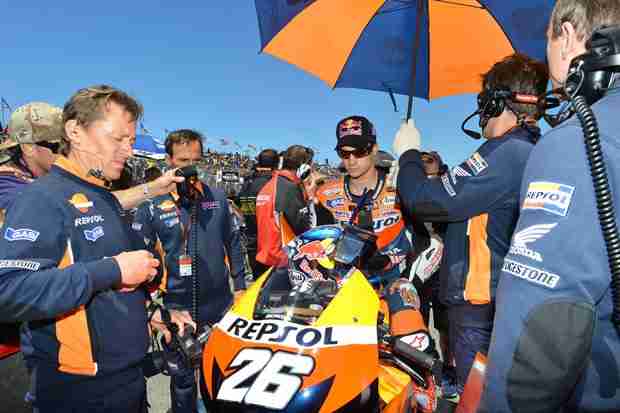 The Spanish rider for the Repsol Honda Team has been at his most consistent so far this season, stepping onto the podium at nine of the ten races contested to date and taking victory at the German Grand Prix. Second in the standings, Pedrosa will rest up during the two-week summer break and think about the remaining eight Grands Prix that will decide the MotoGP World Championship for 2012. He remains one of the strongest candidates for the title.

You’re second in the World Championship and 19 points off the lead at the halfway stage. Is the season going as expected?
“It’s gone well. We have got good results and everything has been fairly balanced. We’ve lacked a few more wins, so hopefully we can improve the number of victories in the remainder of the season”.

In a year in which consistency has been your foundation, what stands out to you about your performances so far, and what do you need to improve?
“The truth is that improvement is very difficult, because the competition is very tight and any detail can really make a difference. We must explore all possibilities”.

There are eight races to go in 2012. What will make the difference in the second half of the season?
“I think in the remaining races things will be very similar to what we have seen up until now. Each race is decided by details, it is important to be as high up on the podium as possible and not make mistakes”.

Indianapolis, Brno, Japan, Malaysia… Which of the remaining tracks do you expect to be strongest at and which do you like the most?
“This year we are all doing very well at every circuit –at those which we like and those which we don’t. I think this will continue and that it won’t be tracks that make the difference. You can’t make mistakes and the winner will be whoever commits the least errors”.

It seems as if absolute perfection is needed to win races this year. Is that the feeling that you have?
“Yes, it really is. Whilst at the races you can think that we aren’t going forward and we can give more, but we are at the limit of our possibilities and it is very difficult to make a difference. For this reason we are often racing in a ‘queue’, with little overtaking, because we have reached a level where you can squeeze very little more out of yourself, of the bike and of the circuit”.

What’s your verdict on the performance of the RC213V up to now? Is chatter still the main issue?
“The bike is going pretty well. It is difficult to find an excellent setting at every circuit. Obviously it could go a little better, but I think we’re doing a good job. Chatter is one of the problems that we have. We are trying to fix it, but it’s hard. There is not much expectation of improvement in this regard for the end of the season”.

At Silverstone you were forced to change tyre compounds. Have the problems and lack of confidence with these new tyres been resolved?
“It is still difficult to ride with this new tyre. Obviously as the races go by we have become accustomed to them, but the limitations are still there”.

How do you assess the move to 1000cc, after half a season? Is there much of a difference compared to last season?
“Yes, there is a difference. Especially in the race, because the tyres last a shorter time and this causes the bike to move more, become more difficult to control, and become harder to move when entering and exiting corners. For this reason, I think this year there is little difference between the top three and the rest”.

Is this new cylinder class much different to riding the 990cc bikes from your rookie season?
“No, the way of riding with it is not very different. The power is quite similar. It is clear that the bike is different, but in terms of riding the biggest change lies in the tyres. The ones we used back then were very different compared to now and it varies things a bit”.

How do you feel about the other change –sharing the track with the CRT bikes?
“These are bikes that are still evolving and have not, so far, got great power. We know that the goal this year was not to match the MotoGP bikes. It is an innovation that is useful for getting more riders on the grid and offering a better show. Let’s give them time”.

In Estoril you got your hundredth podium in the World Championship and at Laguna Seca your 65th in MotoGP, overtaking Wayne Rainey and becoming the sixth most successful podium finisher in the premier class. Is it a motivation for you to achieve these spectacular milestones? Do you have a challenge that you have particular desire to match or beat?
“It is true that I have taken many podiums in MotoGP, but I have not won as many times as I wanted. I would love to achieve more victories”.

You confirmed your renewal with the Repsol Honda Team a couple of weeks ago. Your future teammate Marc MÃ¡rquez has listed you as his idol. How do you think it would have been for you if you had been Mick Doohan’s teammate in your first year?
“It would be very difficult to have Doohan as a teammate! I think he was a very tough rider… I don’t know if I would have been at his level, but for sure we would have learned a lot and made things very difficult for each other on track”.

Last year, you made the most of the mid-season break to recover from the crash at Le Mans, but this year you have had better luck with injuries. What plans do you have for the summer?
“I will go back to Europe, try to rest, recover energy and generally enjoy a break. I’ll catch some sun, which is always good, and rest for a few days. There will be visits to friends and family to laugh and be happy, then it will be back to training”.